The other day I went out and rode the ‘Tour of the Cairngorms’, a fantastic road cycling route that I’d been thinking about for a couple of years now. I started at Ballater and the route took over 5 passes; Gairn Shiel, Lecht ski centre, Drumtochter, Dalnavaid and Glenshee ski centre over 165 miles. It takes in some of the UK’s finest mountain and lake scenery, continuously varied from the moody Cairngorm massif (formed 40 million years ago), ancient Scots Pines in the Caledonian forests, lakes around Aviemore, barren Arctic tundra near Dalwhinne, and the broad leaf forests and craggy mountains of Perthshire.  The route also follows three of Scotland’s finest rivers, the Spey, Garry and Dee which is essential in making fine Malt Whiskey known by the Scots as the ‘water of life’. Several of the well know distilleries are situated along the route such as Enochdhu, Dalwhinnie,  Glenlivet, Glenfiddich, and Lochnagar to name a few. It would have been nice to stop for a dram but that would have been the end of me!

Heading West from Aviemore was hard going into strong wind for 4 hours and going over the Drumtochter pass at the 7 hour mark I felt pretty committed, a long way from home with no short cuts available. Arriving in Pitlochry at 7 pm and it was time to eat and I need some salt but also felt pretty sick. That feeling only got worse when I saw a roadsign saying 60 miles to go – whoops – I must have missed a leg on the paper map that I glanced at in the morning – I was banking on 35 to go. I’d also forgot my bank card as the idea to do the route was spontaneous that morning and it had been a bit of rush getting out of the house. Thoughts of a night out in lycra and being eaten to death by the midges spurred me on and those last 60 miles only took 3 hours. In the cool air at 9 pm I was working hard and running hot going over the Glenshee ski centre pass but the last 25 miles down the river Dee through rolling hills and forest was a treat. 11 hrs 15 mins. 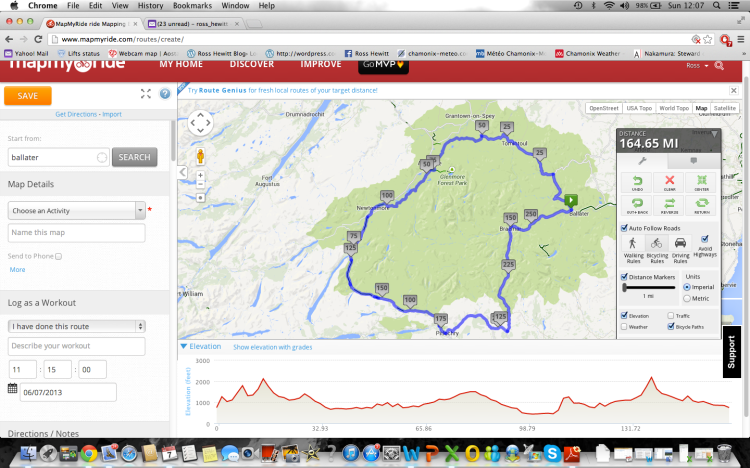