We arrived at the Cosmiques hut with the plan to climb Tacul and Maudit and ski the Brenva Spur on-sight, but news there had been 40cm of snow dampen our enthusiasm. Tour Ronde and the Brenva Face had been in the rain shadow, while the Chamonix side had received a pristine bounty. As the afternoon cloud lifted we studied the voie normale and considered our options. There was good chance of being forced back in the dark by avalanche risk if we opted for Tacul and Maudit, so we went the long way round, over Col de la Fourche.

We woke just after three in the morning, forced down as much food and water as possible, and headed out into the night to ski the Vallée Blanche. The night was black as ink and the usual summit reference points were cloaked in darkness. Even my powerful head-torch’s beam seemed to be absorbed by the night. Navigation became difficult. Suddenly, something unfamiliar began to form in the darkness – a strange shadow against what little light there was. We broke left to ski parallel to a chaos of huge ice blocks as much as four metres high. The seracs under Col du Diable had fallen. We continued to ski down the Vallée Blanche, beside the avalanche, all the while adding yet more distance to our day. Eventually, after a considerable detour, we were able to ski round the toe of the debris and start back towards Cirque Maudit. Our friends had passed this way the previous afternoon while traversing from Torino to Cosmiques, so we knew this biblical serac fall must have happened in the last few hours. It was an ominous portent for the Trilogy.

At Col de la Fourche we met with dawn as the sun peered over the eastern skyline. That moment of first light is a revelation for the mountaineer whose senses have been deprived in the dark. Fear, anxiety and doubt evaporate as all becomes clear, calm is restored and the low point in the soul disappears. In front of us the Brenva face revealed its magical hidden secrets. 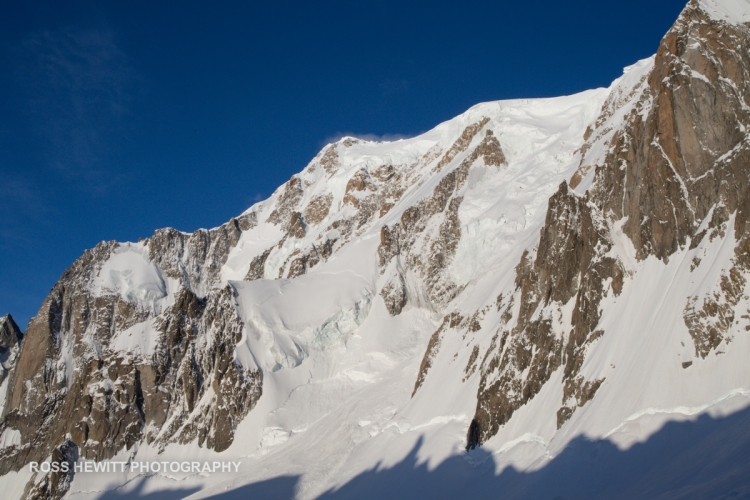 Crossing Col Moore at just before seven that morning, we stashed excess kit in the snow to reduce pack weight before starting up the route. We left behind our skins, ski crampons, ropes, shovels, probes, and extra food and water for the return leg. We would travel through survivable avalanche territory on the way back, but on the route itself only a transceiver was needed for body retrieval by the rescue services. Having estimated the snow would be soft enough to ski by half-past-eight, that gave us a leisurely hour-and-a-half to bootpack 700m. 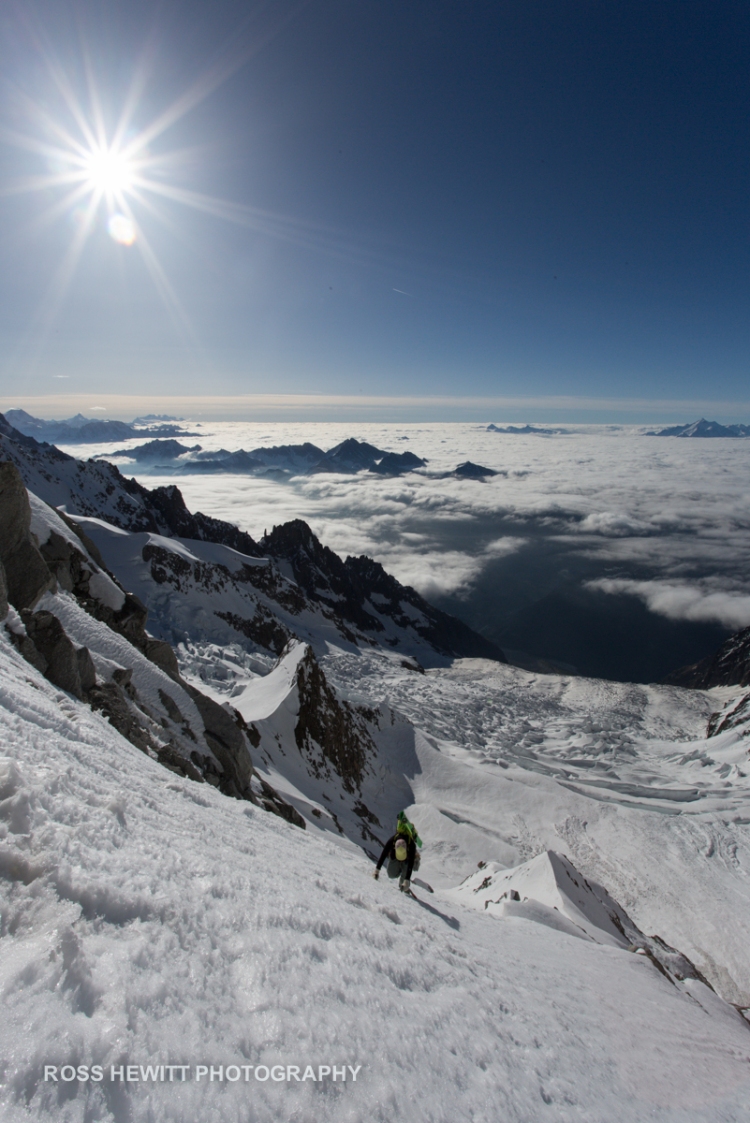 The air was still and a blanket of cloud was drawn over the landscape below keeping Italy snug. Most people would still be curled up in bed enjoying a lazy Sunday morning. Snow and ice crystals glimmered, and the temperature was pleasant enough to climb the iconic curling arête of the Brenva Spur in thin mid-layers. We quickly covered the final few hundred metres to the pyramid rock tower, gatekeeper to the serac exit onto Col de Brenva. 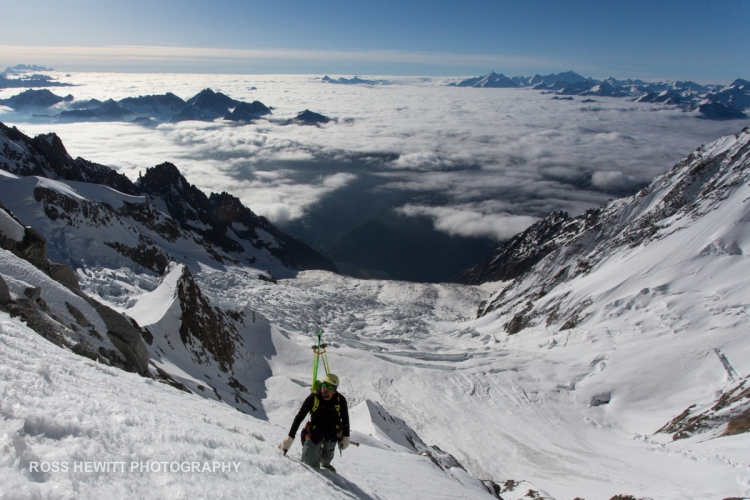 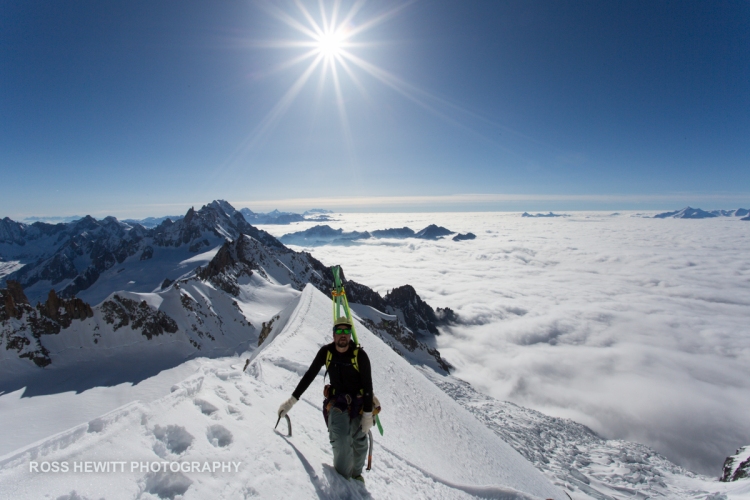 After stamping ledges in the snow, we swapped crampons for skis and took in the magnificent surroundings. The endless east face of Mont Blanc lay to our right, a crazy mix of couloirs, buttresses and tumbling seracs that held historic alpine climbs such as Route Major. Sun-warmed powder waited for us on the upper section but, as I gazed on it, I wondered how it would ski. 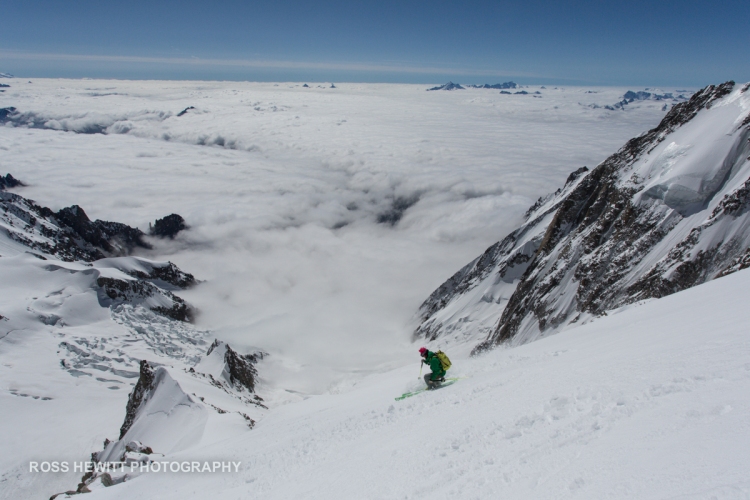 We skied some cautious turns initially, allowing our sluff to run in front until we had passed a section of shallow snow over the ice. Then the angle eased, allowing us to open it up more and a dozen turns of almost sensual skiing took us to the narrow arête. We dropped onto wide open slopes holding perfect spring snow sucking in a couple of hundred metres in five or six swooping turns. Smiles all round. 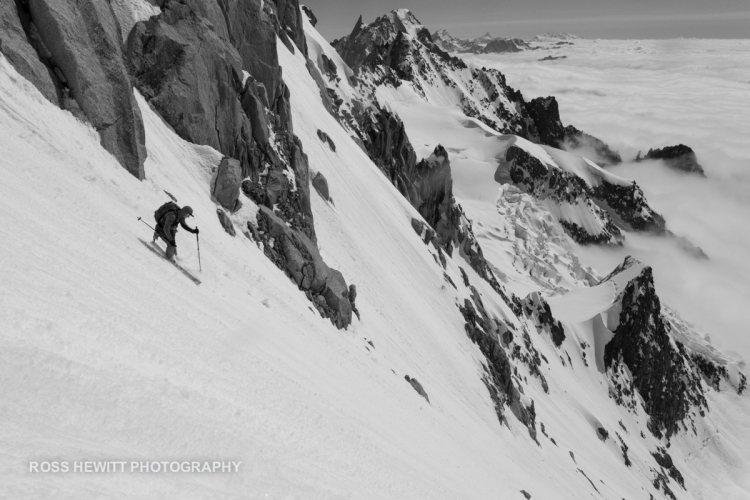 Now, however, we had to cross back over the Brenva glacier and Col de La Fourche before the final 600m skin back up the Vallée Blanche to the Midi. We were all hit by a sudden slump in energy as we skinned back towards the Fourche, the adrenaline of the descent fading, replaced now by heavy fatigue. The fun was over and it was time to push hard for the last three hours and escape the searing alpine sun.