During the 2016 winter I was preparing for a spring ski mountaineering expedition to the north east fiords of Baffin Island. Situated deep within the Canadian Arctic, this area has granite walls that soar up to 1500 m out of the frozen fiords. Where there are diagonal weaknesses between the walls is where you find the couloir skiing. The team will be dropped into the fiords by snow machine and from that point onwards we will operate on our own for 3 weeks; skiing, eating and sleeping from a tent on the ice. With temperatures there regularly in the -20C range and dipping as low as -40C, its important to test all equipment thoroughly beforehand. I had been to this area before and found that the sea ice acts like a heat sink sucking the heat out of your feet and legs, which became a constant worry to stop my toes freezing. The nearest helicopter is 3000 miles away in Halifax so rescue is not straightforward or fast. For this trip I chose the Lenz Heat Sock 1.0 combined with the most powerful battery option (RCB1800) to help keep my feet warm, using solar charging systems to recharge the battery at night.

When I received the socks I wanted to test them with my ski touring boots and get used to operating them. The product is well made with the high quality you would expect. Out of the box the batteries were partially charged and only took a few hours to fully charge.

Before Christmas there was only 50 cm snow in the Alps, just enough to get around on the glaciers in the high mountain. With low avalanche risk we were ski touring a lot and managed a trip to the beautiful old Couvercle refuge in the Talefre Basin. This coincided with the full moon so the night skies were due to be spectacular.

It usually takes 3 hours to go from Aiguille du Midi to the Couvercle refuge but the lack of snow and the need to rope through the Salle a Manger on the Mer de Glace meant slow progress and in the end it took 6 hours. I was happy the sock felt the same as other merino socks and didn’t cause any problems such as heal rub. The heating element runs under the foot and although you initially feel it when you put the socks on, you soon get used to it and completely forget its there. The socks have 3 heat levels and I set them on the lowest during the tour and then went to level 2 later in the hut when the outside temperature dropped. The battery clips in place to stud fasteners on the top of the sock. The sock cuff then wraps over the top of the battery. Its worth taking the time to ensure the sock cuff is fully wrapped down over the battery as I found in the lift queue its quite easy for people to graze the outside of your leg and knock the battery. Once you are aware of this it’s easy to avoid. In comparison, other ski boot heaters I have used with batteries at the rear of the boot tend to get damaged/knocked off on chairlifts so it’s a better system.

Michelle Blaydon on the Leschaux Glacier with the Chamonix Aiguilles behind

Full moon over the Vallee Blanche 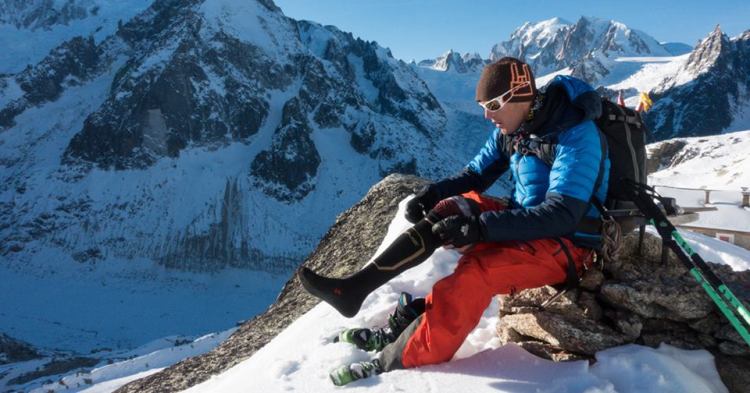 Ross Hewitt on the ‘roof’ of the Couvercle getting ready to ski down.

The next test planned was more onerous with an alpine climbing trip to the classic 700 m, TD- Fil a Plomb ice route (700 m, TD-) on the north side of the Rognan du Plan near Aiguille du Midi. I teamed up with Andy Houseman for this and as always, in the shady north faces, its pretty cold in the short December days. With the benefit of heated socks I chose my lighter, less insulated Scarpa Phantom boots to enable me to climb quicker. The test here was those periods standing belaying where you usually get cold feet pretty quickly. I set the battery to level 2 and was really pleased to find my feet stayed comfortable throughout the day. Without the heat socks this was definitely a day I would have used more insulated bigger boots which are less fun to climb in. We reached the cable car around 3 pm and after 7 hours on setting 2 my batteries were starting to fade but they had done the job brilliantly. 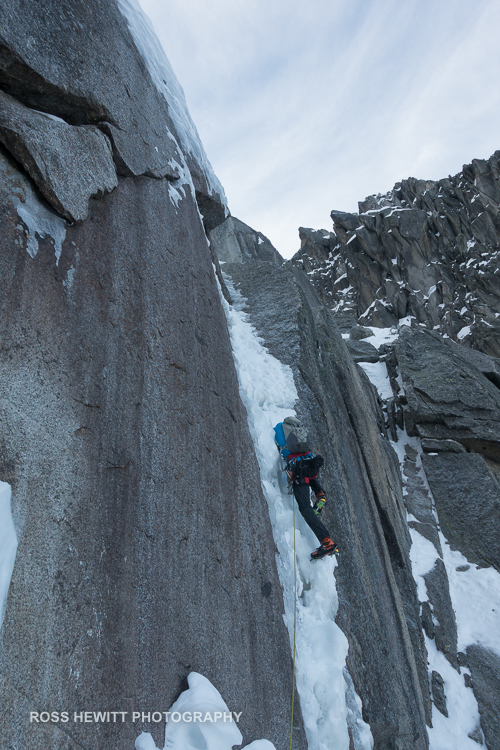 Crux pitch of Fil a Plomb

Since then I have used the socks for the 3 days ski technique course that forms part of the training on the British Mountain Guides scheme. Training days tend to have some time discussing topics when you can get cold and I was pleased to keep my feet warm with the Lenz socks.

These tests have confirmed the socks are brilliant in ski touring and climbing boots and the element under the foot does not affect performance and is not felt after a few minutes.

Note : If you have world cup fitted race boots then the sock may be too thick to fit in the boot and you should check the fit with the boot.

Roll on 2 years. I am still using the same battery packs but changed socks in spring 2016 to the Lenz Heat Sock 5.0. This sock has the element running over the top of the foot and wrapping over the toes so there is nothing under the foot which can be noticeable in boots. Two seasons of hard use and I can confirm the sock is hard wearing and the system sufficiently robust for all the abuse I throw at it.

Whether I’m guiding at a more relaxed pace or having a big day on the Midi where you put your skis on in the tunnel and ski flat out to town, the heat socks are the only thing that stop my feet freezing as they plough through -30C snow and all the blood gets directed to my quads!

So to recap, the heat sock 5.0 works best in ski boots due to the element position and combine this with the RCB1200 or RCB1800 batteries depending on how long your days will be.  For alpinists definitely go for the RCB1800 which I use, for skiers doing half days then consider the RCB1200.