After a wicked day skiing powder in the Rocco and Rond we rushed home to get bivi gear and food together, then raced up the valley to GM to catch the last bin up on their last opening day. All the lines that were in condition in the Argentiere basin had been skied several times by the team so Luca, Sylvain and myself decided to go to the Aiguille d’Argentiere to ski a variation of the classic Barbey.

In the pre-dawn we skied down from our bivi and started to skin up the Argentiere glacier. Luca wanted to take a ‘short cut’ up a direct line on the morraine rather than skin round the usual way where there was already a skin track. It didnt appeal to me so I went my own way. My stomach was giving me jib and struggling to get a tour rhythm I had frequent stops to take photos as the sun hit the North Wall of the Argentiere basin.

Arriving in the Milieu I could see a pair way up ahead and realised I had been faffing a bit too much. At the rimaye I caught up with the others only to find it was a guide and client wearing a Luca look-a-like kit. With them no where to be see and no phone reception I assumed they had kit problems and turned back. With only half an hour to the summit I was at least going to go that far. On the summit ridge at 9 am a cold wind was blowing from the SW so I couldnt wait around long. Sure the boys had bailed out, I wasnt psyched to play with the cornice on our intended route and decided to go down the Barbey. Once onto the East Face it was much more pleasant being sheltered from the wind and I shed a couple of layers. I felt sorry for the teams skiing the Milieu which looked destined to remain bullet hard all day in the wind. Traversing right I joined our intended line and was able to put in some big GS turns in the untracked pow. Lower down this line hits a big cliff so I cut back right into the Barbey where conditions were disgusting – it had been skied late on a previous day and the slope trashed as the wet snow was set running. An hour later I was over Col du Chardonnet and back at the Lognan end of season party by lunchtime. 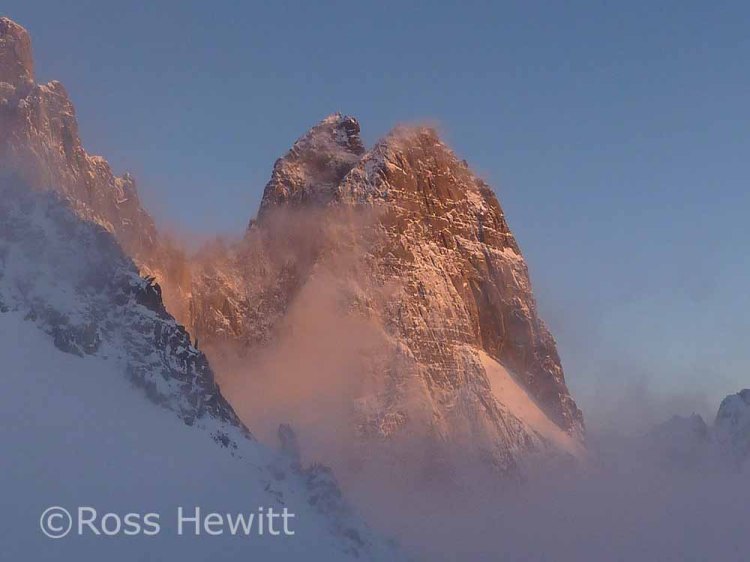 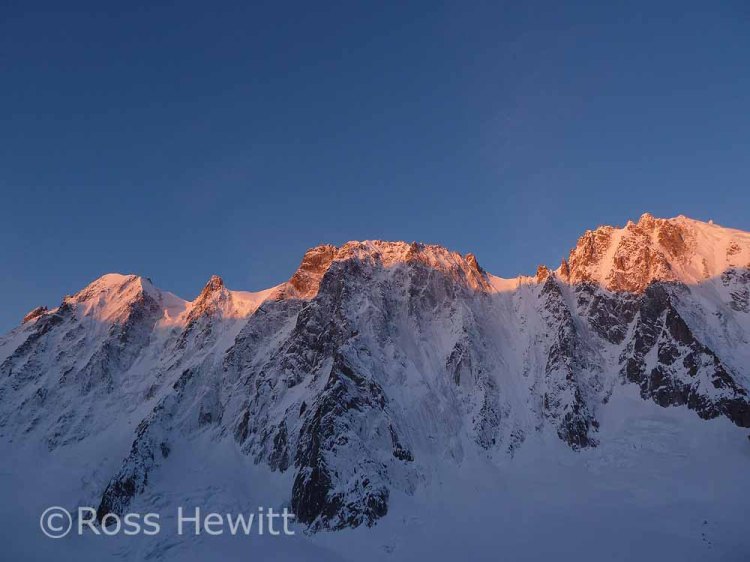 I am the little dot near the top of the headwall. Luca’s short cut cost them one hour!