Its been a while since I posted a blog and thats mainly because after a few dry years it started snowing in Europe early December and kept snowing until the end of May. That meant it was a pretty full on 6 months with very little time to put ‘pen to paper’ so to speak.

I started the winter with a herniated L5-S1 disc which caused muscle wastage, power and recruitment speed in my leg. For example if I tried to stand on my tip toes my left leg would sink until my heal was on the floor.  Thanks to the Osteo/Pro-runner Carlton Rowlands I mannaged a fast comeback.  The recovery went from the lows of skiing down the Midi arete in December and taking my skis off midway, unable to handle the vibration without nerve pinching and having uncontrolled leg movement, to basically doing my stuff and not holding back.

Mid winter also included 2 months of ski guiding and the IFMGA ski guides test which I am happy to report went smoothly for me. 3 exams down and all thats left is the final alpine test this August which I’m now fully focused on.

With a lot of my ski partners injured or retired, I did a lot of solo missions and decided to leave my camera at home and take the gopro out for a change to capture a few of my powder turns. I’m a very impatient person so taking time to make good edits while getting ready to go out the following day is not my strong point but it gives a flavour of how good the skiing in Europe was this year. These are all edits from the high mountain and arguable the most fun skiing was in the trees early December with an incredible base over the spines and ridges before the Christmas and January rain.

Here’s a few of the memorable days:

Solo skiing from the bend of Couturier in flat light as the cloud rolled in, then an afternoon sun run on Z de Papy the same day

Shoulder of Aiguille du Tacul with Michelle Blaydon, probably the best top to bottom snow quality I’ve ever come across

Pre-Christmas Couloir Cache into the Brenva Glacier with Tom Coney

A solo mission hitching through to Skyway, under the cables, Marbree and then back to Chamonix via the Valley Blanche. Marbree was so sick until I hit a rock and broke my 2 day old ski under the foot. It happened to be my left leg that took the shock which was recovering from the disc herniation onto the sciatic nerve route for that leg. After more than a little worry I’d suffer a setback, I woke up fine the next day. Lucky, very lucky.

First bin up Grands Montets. The mercury reads -20C. We’ve queued for an hour and the cold has crept insidiously up through the soles of ours boots and numbed our toes. The snow in the Pas de Chevre is untouched and it will be a race to there first. Running down the stairs creates some warmth but as I ski into shady Pas de Chevre the wind chill is impressive and I feel my cheeks and nose freezing and I have to stop to rewarm my hands. As we drop into the 400 m straight chute of Rectiligne Couloir its like showering in -20C with overhead blower stripping any remaining heat from my body… but its also subliminal and it would be sacrilege to stop. 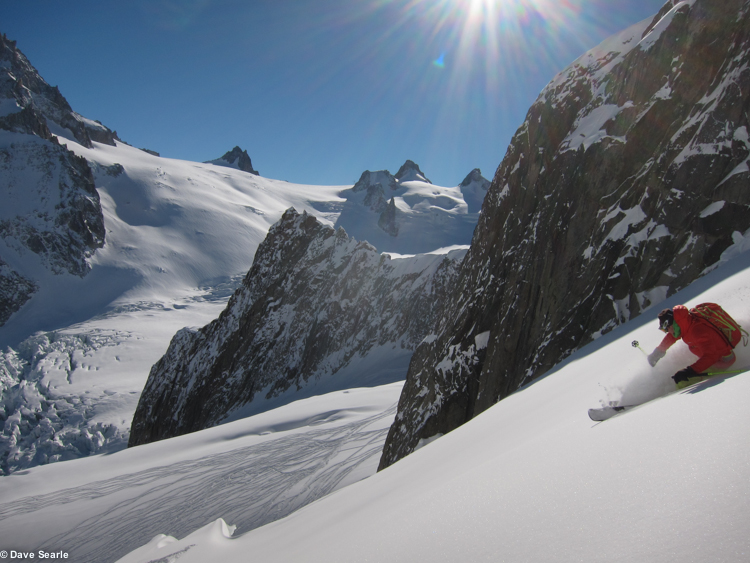 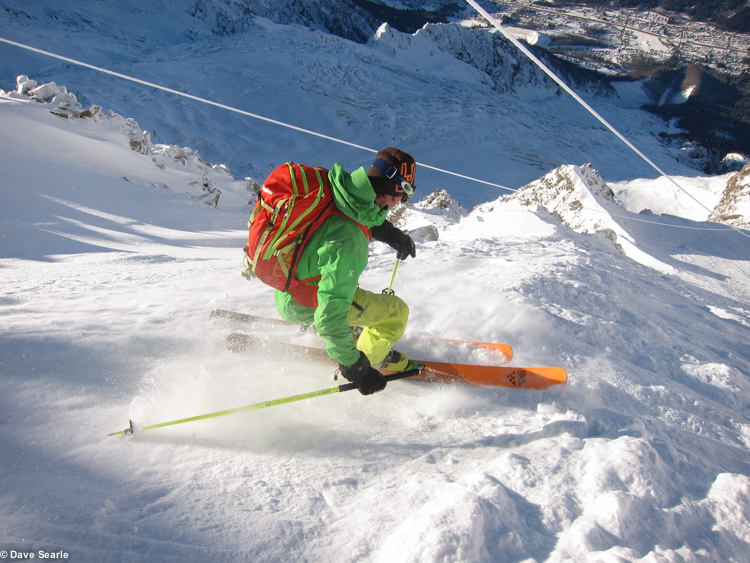 Rectiligne – Grand Envers – Rond. Great to ski with Bjarne and John for first time. And it was blower.

John and Bjarne Salen is in there somewhere! 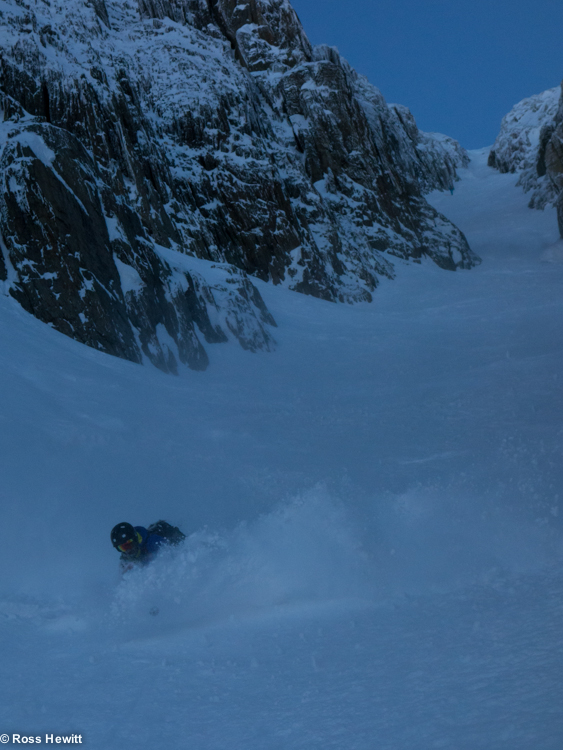 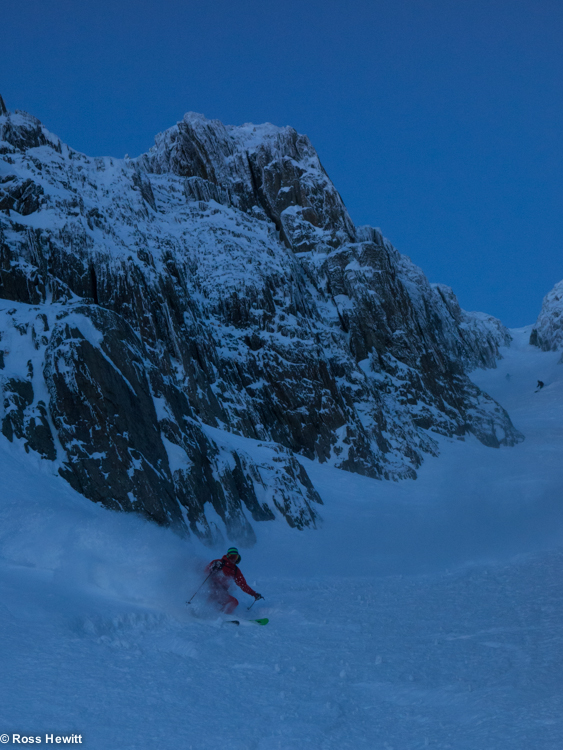 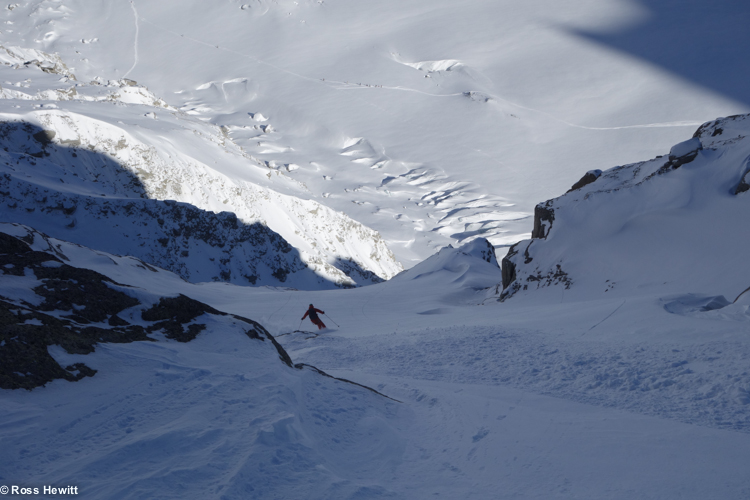 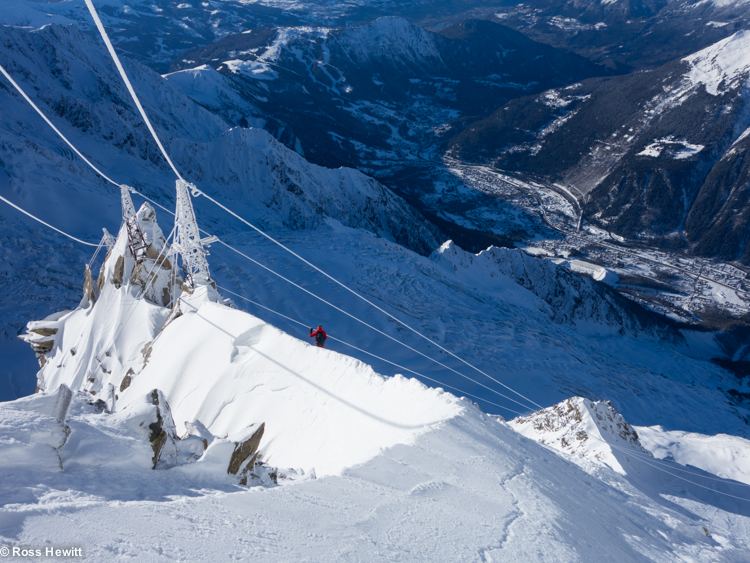 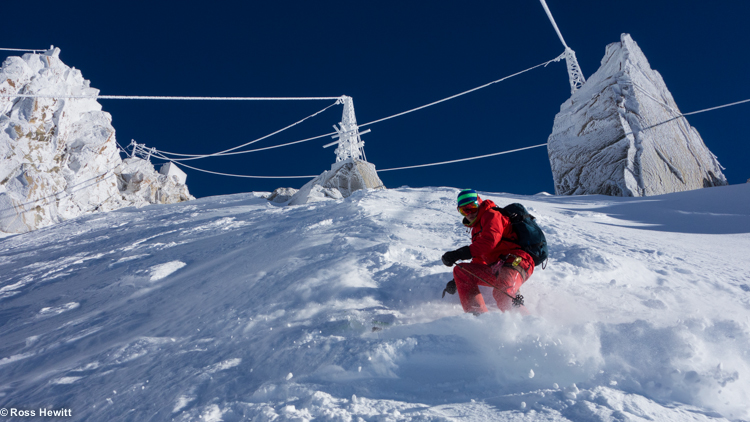 My first outing on the Midi this season felt great to be back in the big mountains and away from the frantic ski resorts which are hooching right now. No ropes on the arrete so we were able to ski it quickly. Following the westerly wind event, some caution was required so we went to Grand Envers which was blower and effortless.

A quick reset back to the Midi and I wanted to ski the Rond to get some training. The pow was so consistent and the bottom couloir was non stop to the Glacier. After tracking round to the Gare des Glaciers, we didn’t fancy traversing the para face, and the moraine facets would have been a wallow fest to the bench under the North Face. So we took the shot down the para face to the old station which was lush. Skiing in the woods below on refrozen crud was not my favourite.

After sprinting thru the gypsy camp and avoiding getting mauled by their rapid dogs it was back to the lift for one more. This time we went for deep pow in Moyen Envers which was a fine end to the day. Down at 4 Roger even hinted at one more – next week now the legs are returning! 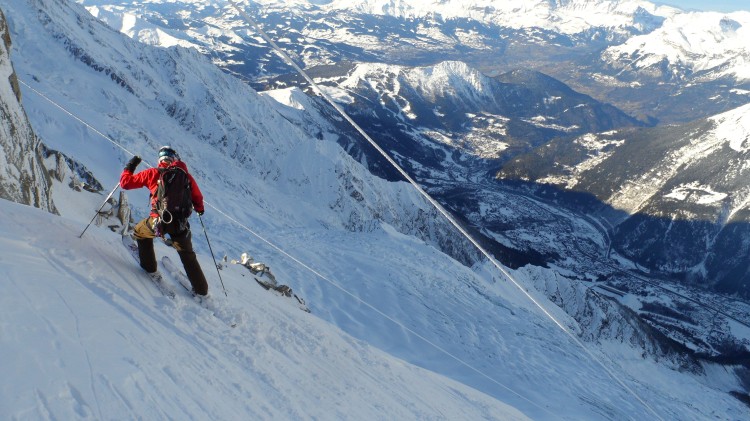 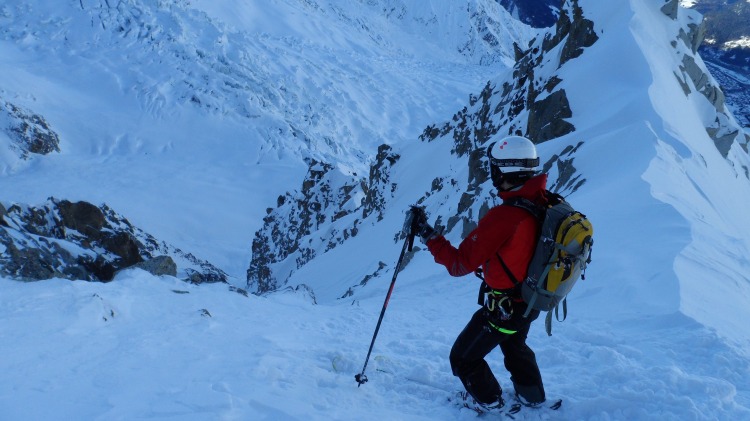