The ski line we took on the Frendo with abseils shown by the dotted line.

I had gone to ski the Frendo 3 times this season, each time being thwarted by conditions; crusty down low, then rain runnels on the lower section and finally wind slabs on the upper half. So after a long productive winter, a lot of routes ticked and an ongoing chest infection, it was time for a break from the mountains and we headed to the Ligurian coast for some sun and warmth.

A few days down there soaking up the warm rays was just what I needed to recharge the psyche to ski another big line. It was with a small weather window after some spring storms that I then rushed back to Chamonix to see what was in condition. After a warm up lap in the Cosmiques to remind myself how to ski, I asked Bird if he wanted to ski Frendo the next day.  Luca had also been wanting to do this line for a while now and got in touch with Ben making up two teams the evening before. We were set to go.  In the morning Minna was psyched too so we ended up being the freeride 5!

The last time I was on the Frendo Spur was in 1997 and I was climbing it. We raced up the arrete in a blizzard hoping to get up round the top buttress before the sluffs got out of hand. We tied on for the final ice couloir placing gear on the rock just in case a big sluff came down. Once we got to the Midi I remember struggling to untie frozen ropes and take crampons. The lift was shut and we had to sit around for nearly 24 hrs until they de-iced the cables the next day. In stark contrast, this time, we enjoyed sweet sunshine and dreamy snow conditions from top to bottom – almost unheard of on a 1100m face at the end of May.

Maybe you don’t have to go to Alaska for spines and velvet powder after all! It has to be one of the most aesthetic ski lines in incredible situations. A very memorable day spent with friends.

Minna at the start and heading off to play between the sunlight and shadows. 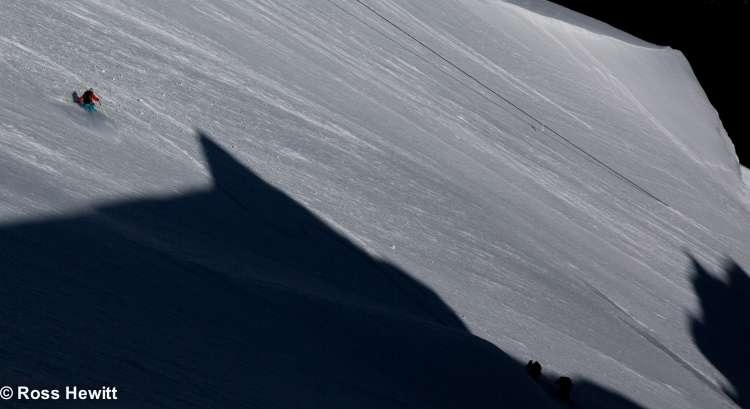 Luca on the upper slopes beside the buttress.

Ben riding the spine in the next few shots. 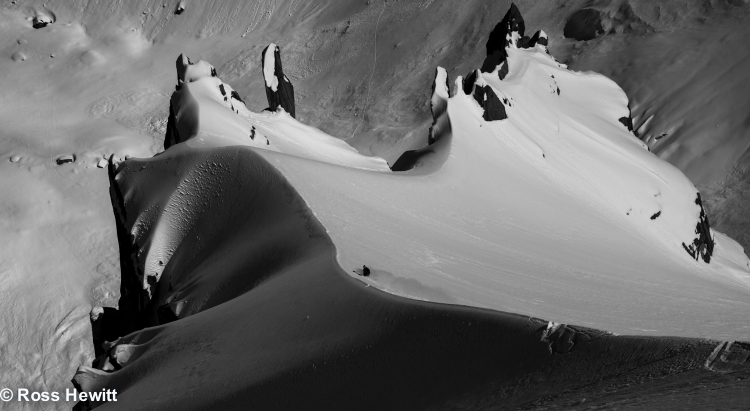 And the resulting sluff – photo (c) Paul Lang – thanks.

Minna at the start of the spine. 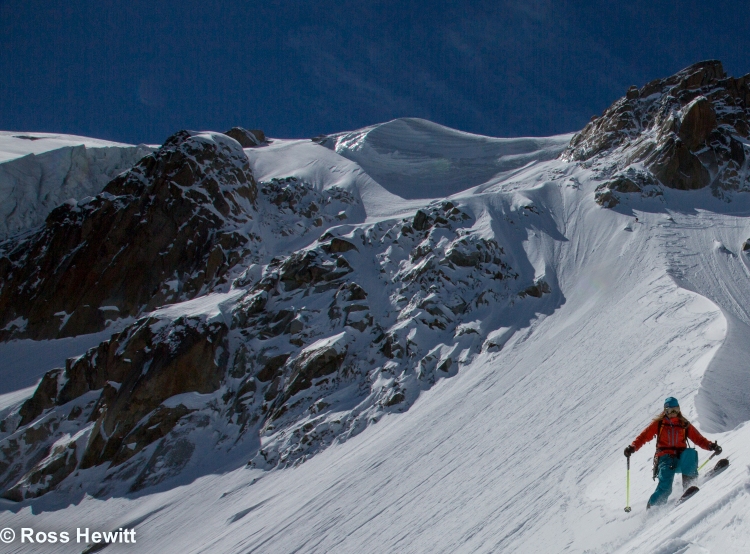 Minna just above the tower. 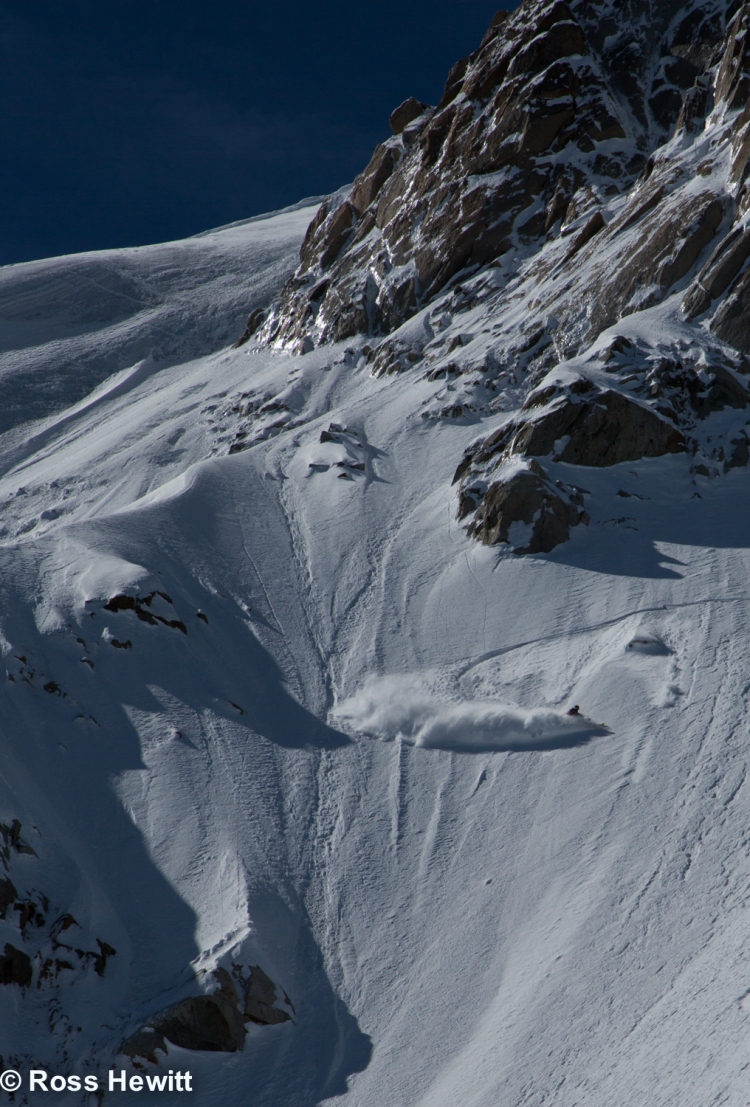 Bird’s energy levels were obviously rising fast as he waited to ski and he charges out the gate with great sluff management. 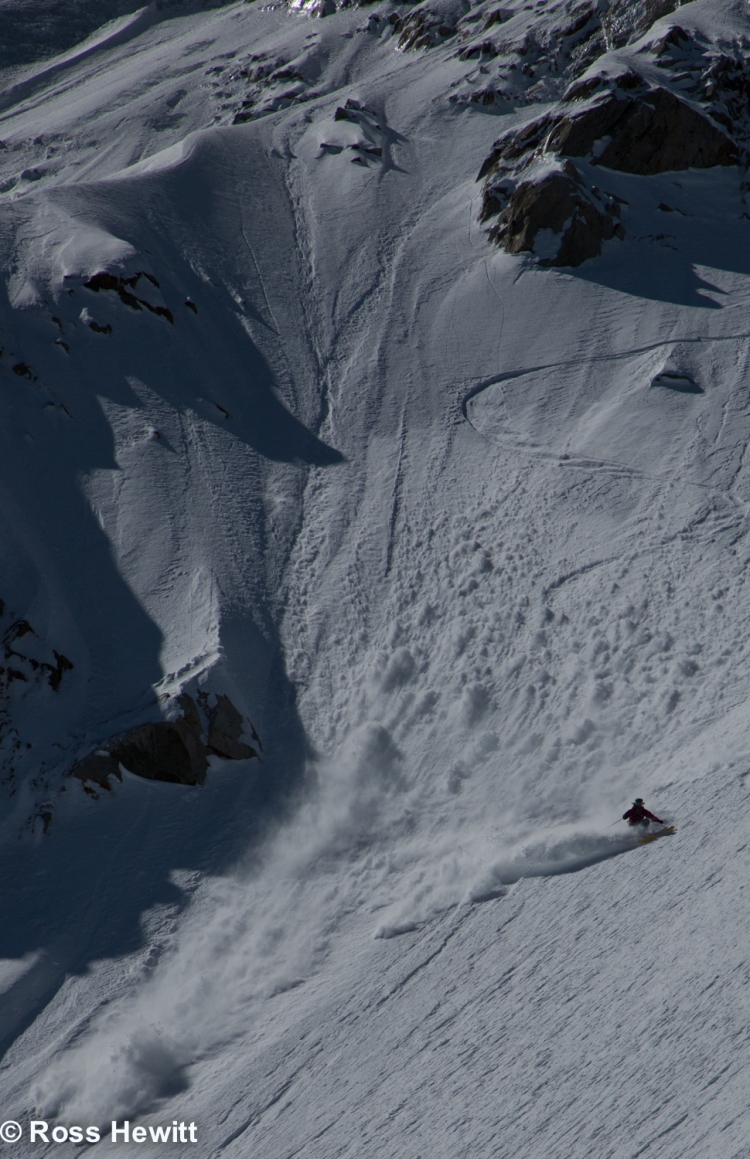 Luca heading to the tower. 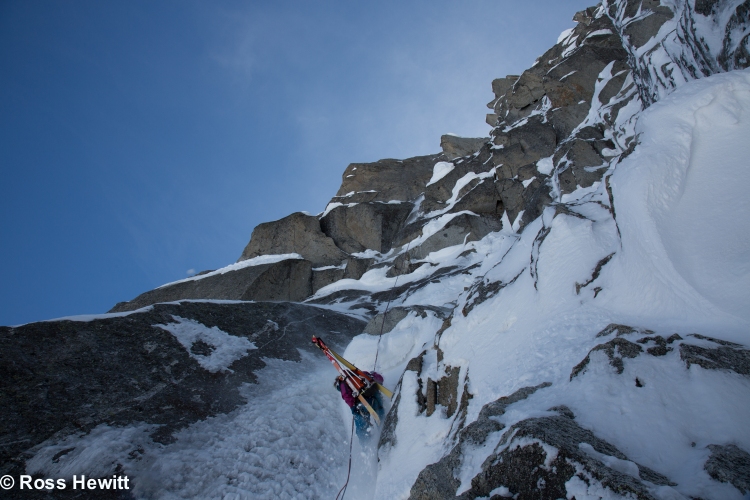 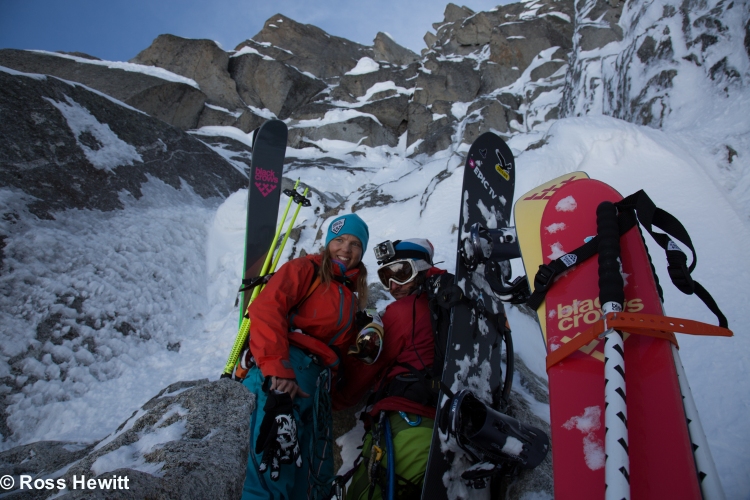 Bird slashing out a few turns.

Minna on the lower slopes which go on and on. 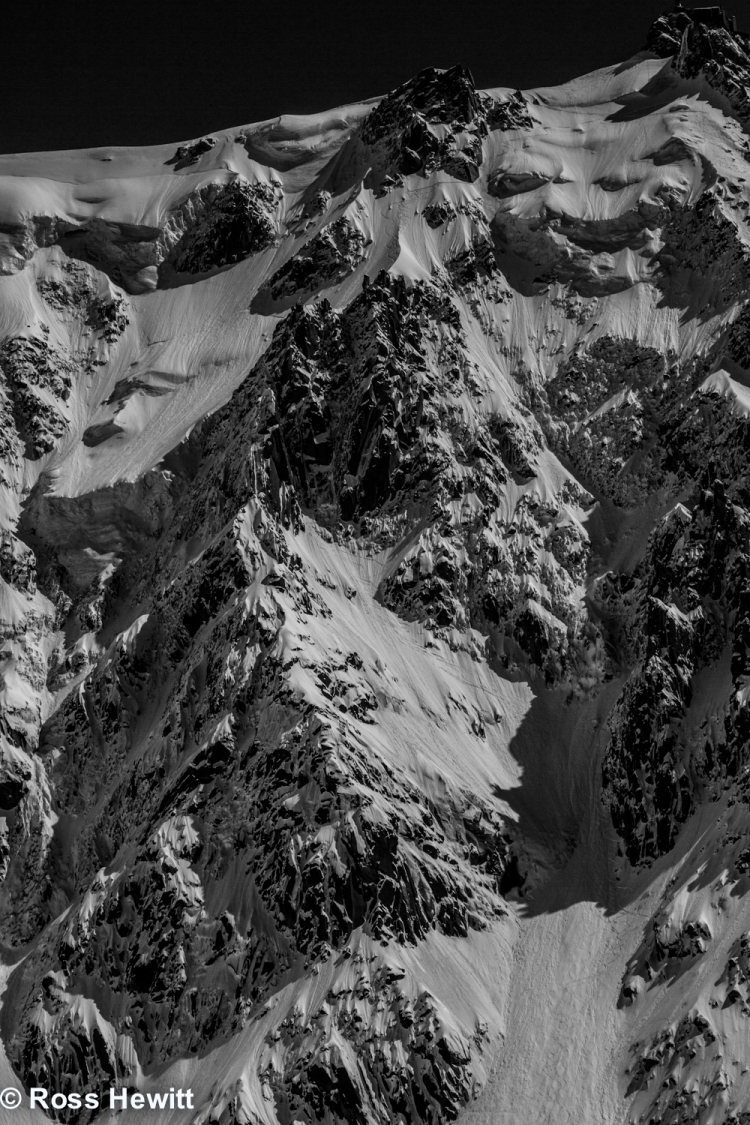 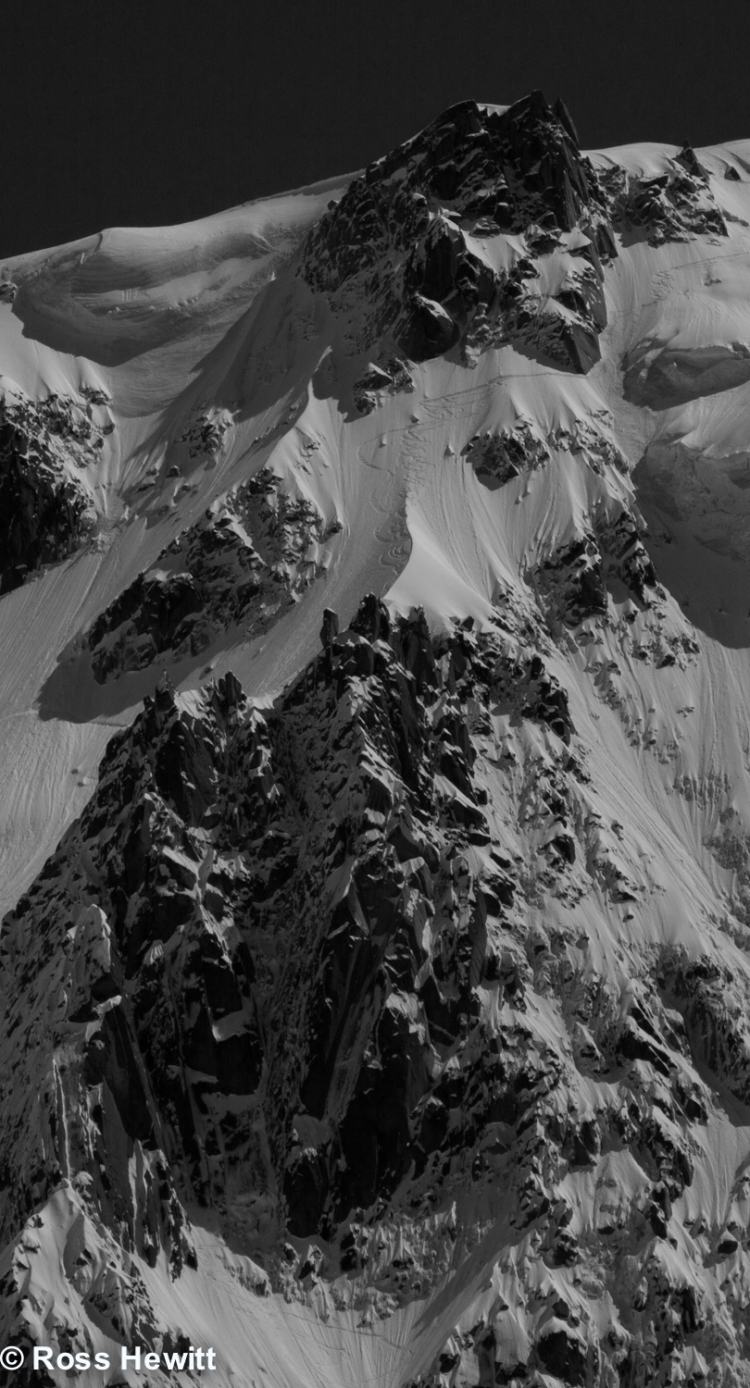 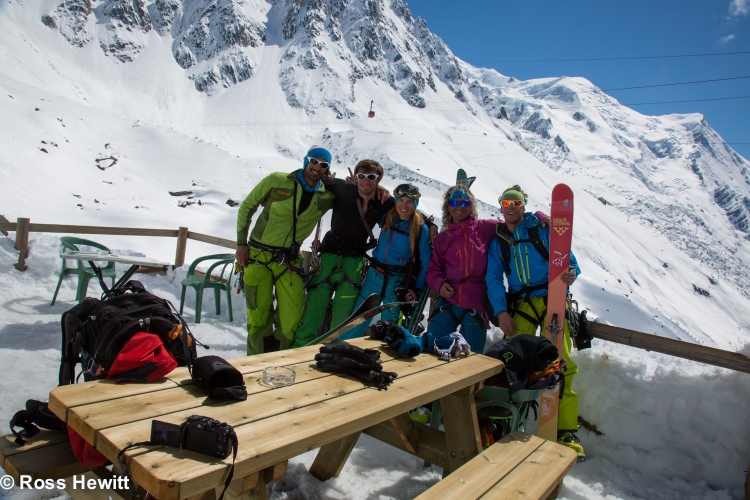 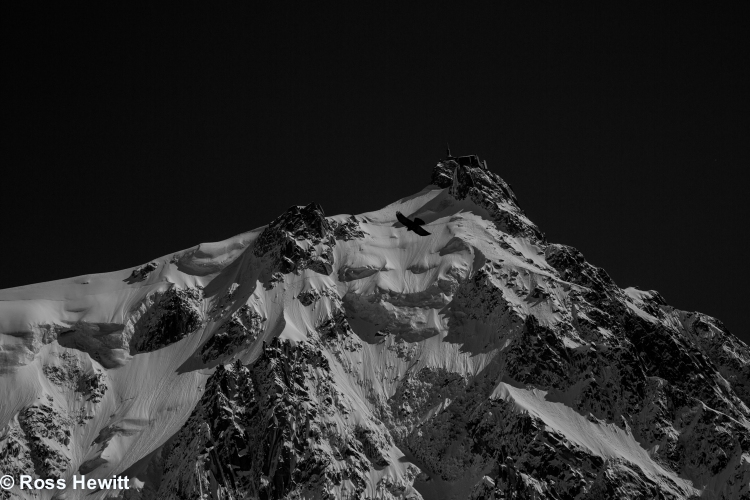 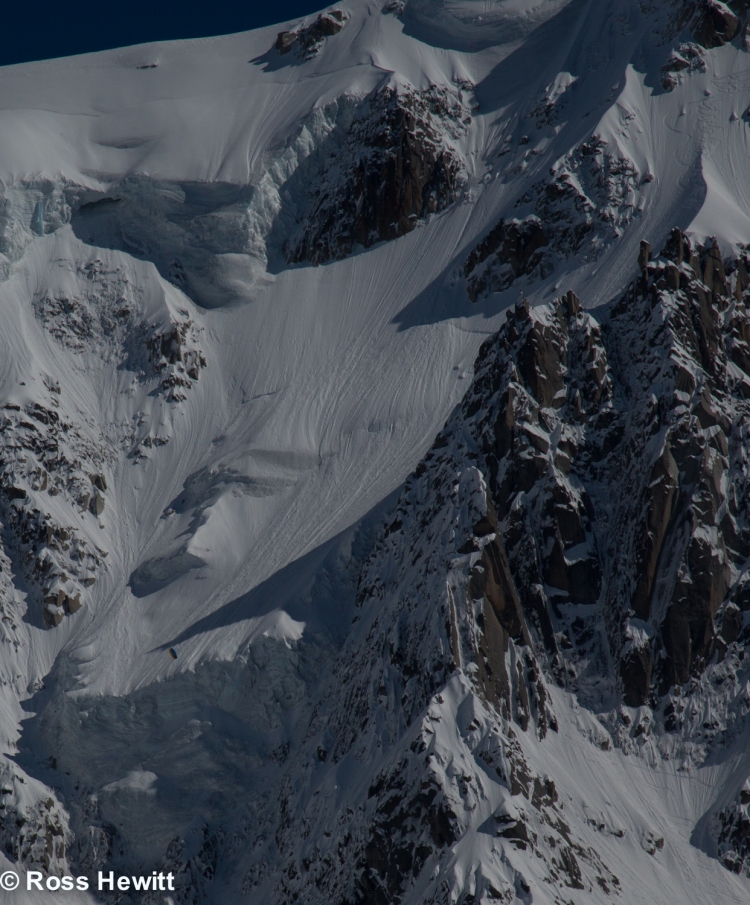 Bird was after more so went back up to speed-fly the line. That’s his wing just above the serac.

The wing is a tiny dot in this shot. 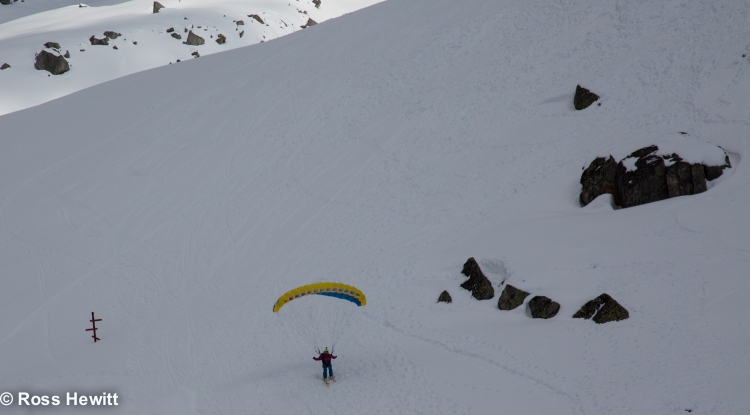