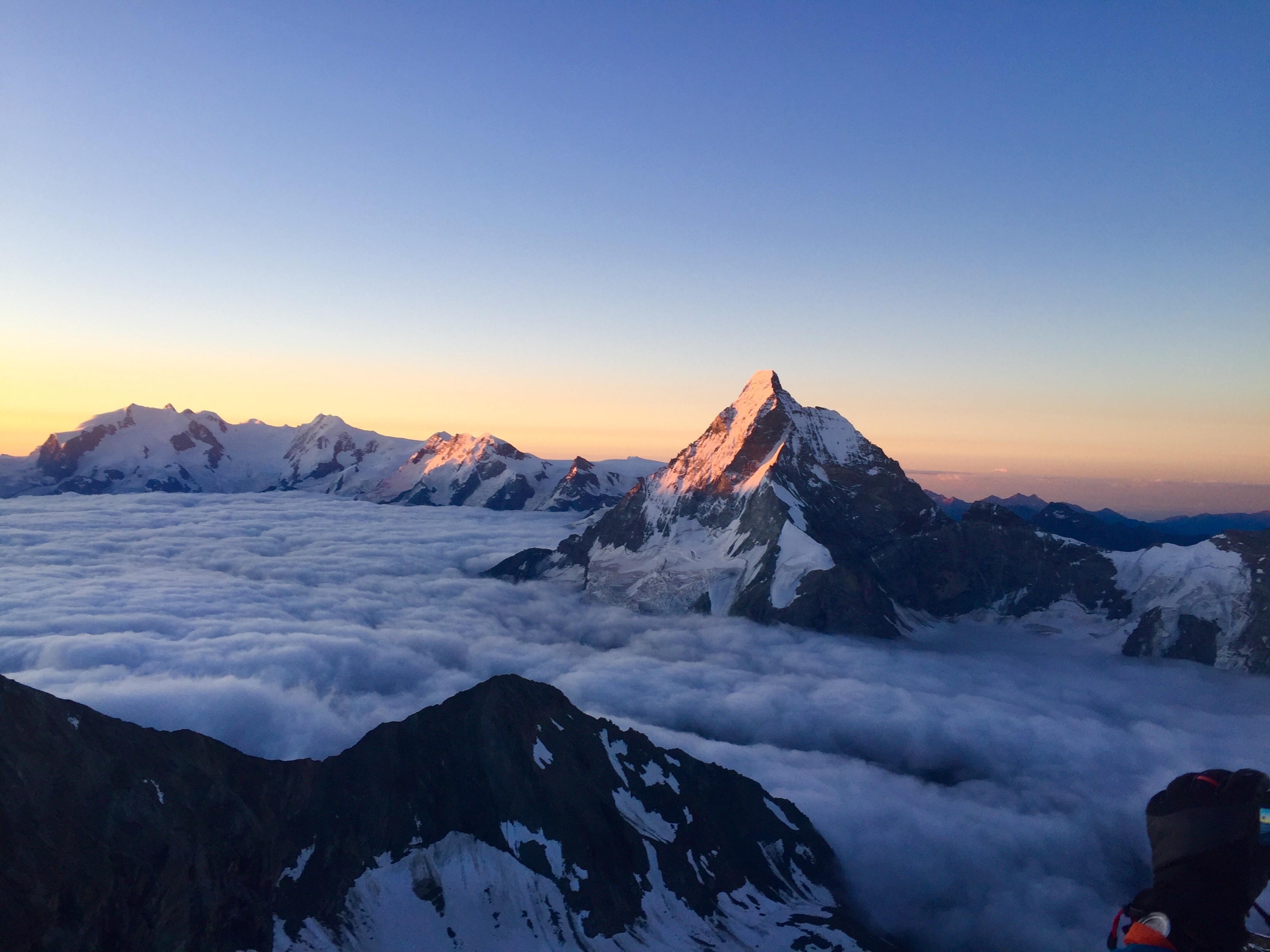 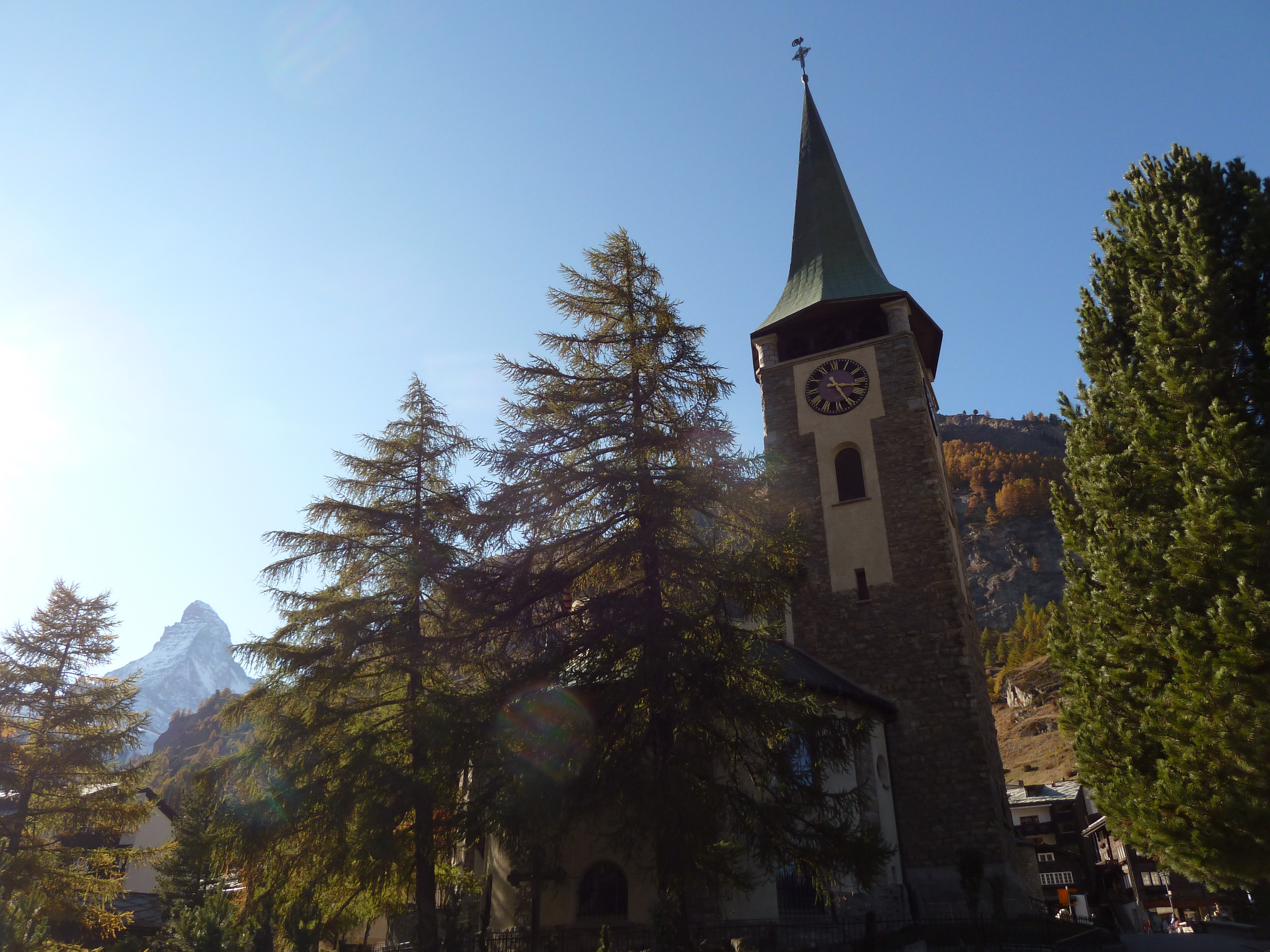 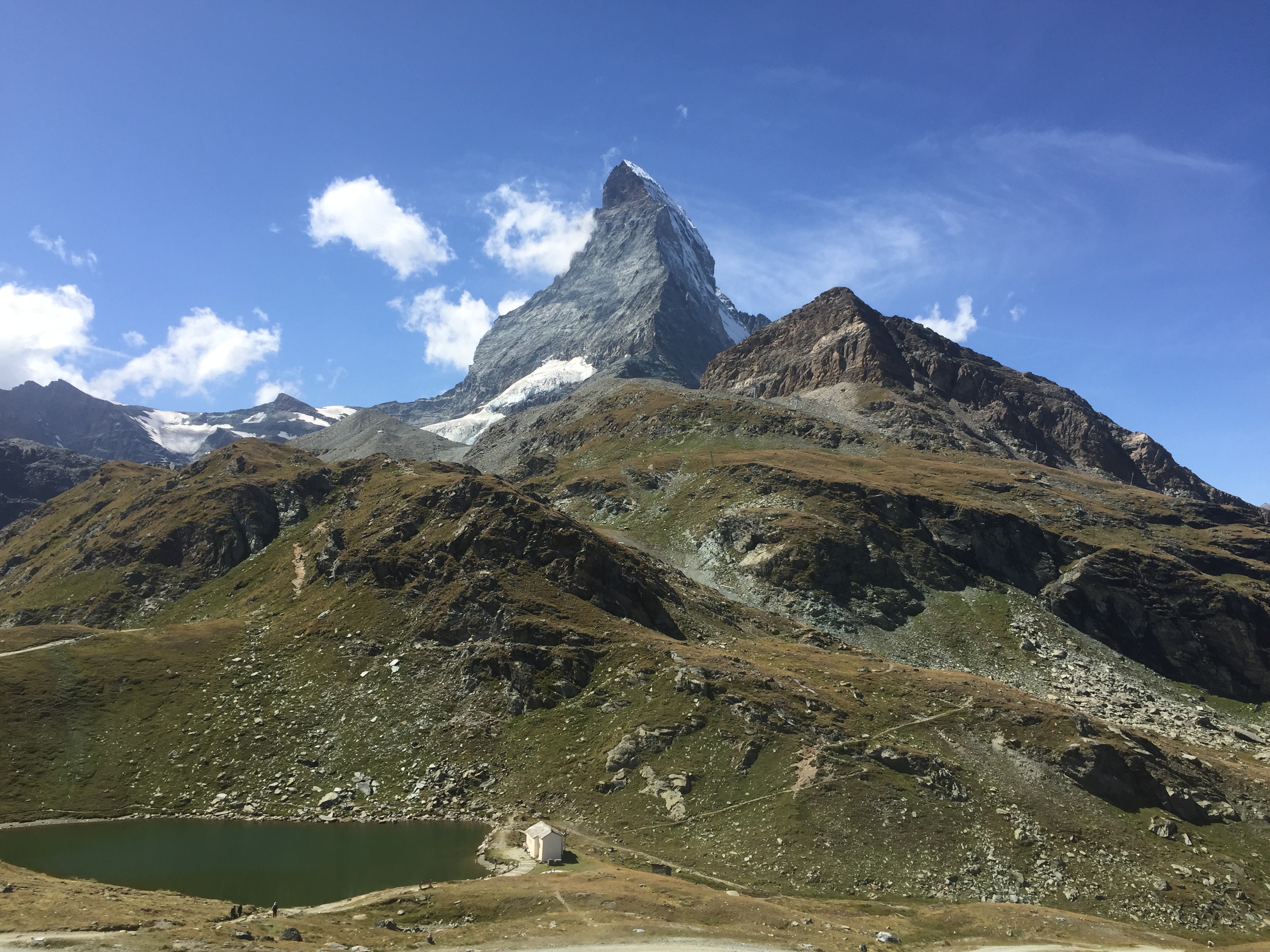 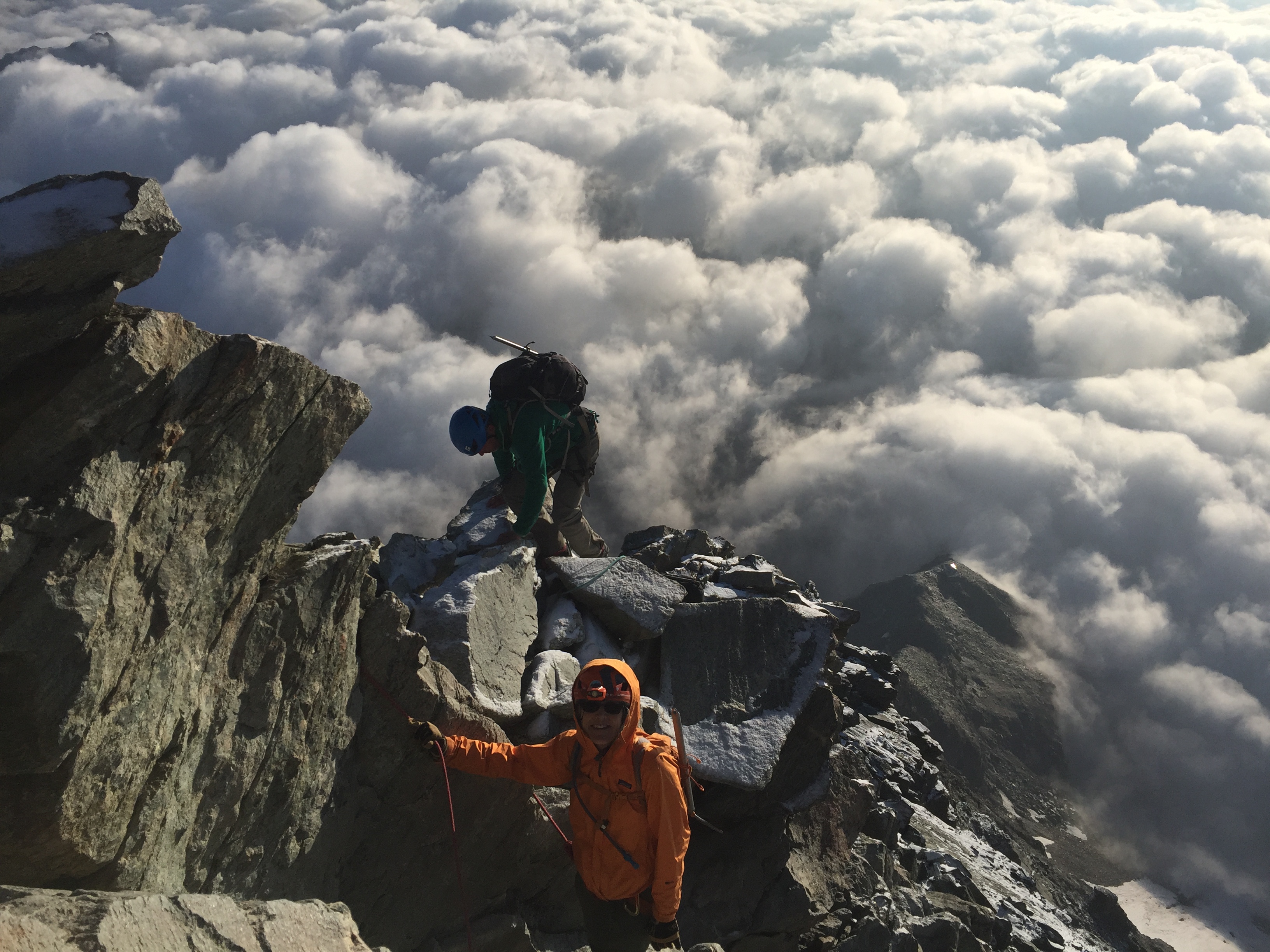 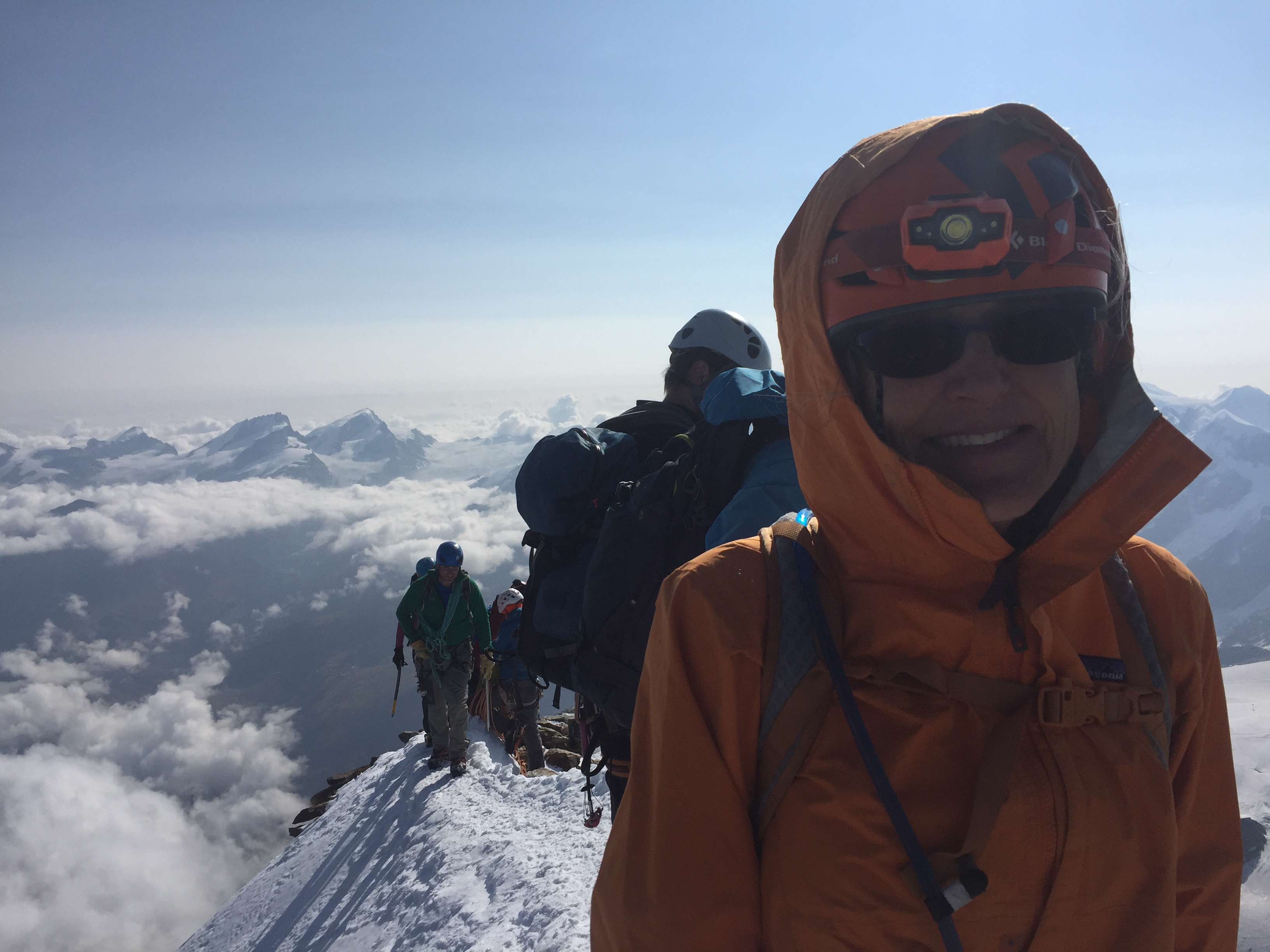 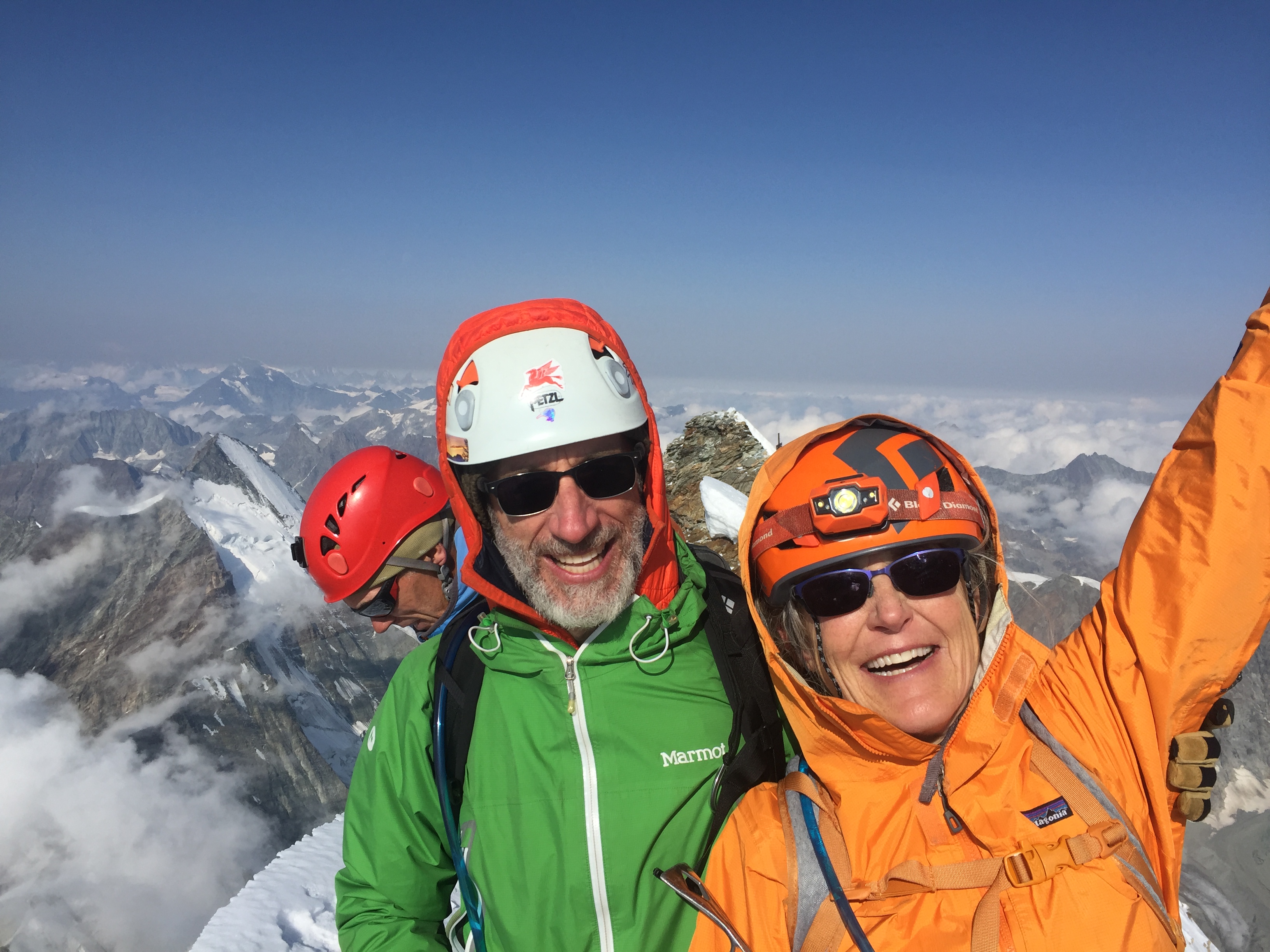 Steller is a beautiful visual storytelling app, similar to Storehouse, but for your iPhone and iPod. I’m psyched to see my Alpine Trilogy article feature in it thanks to Sidetracked Magazine. Check it out at: 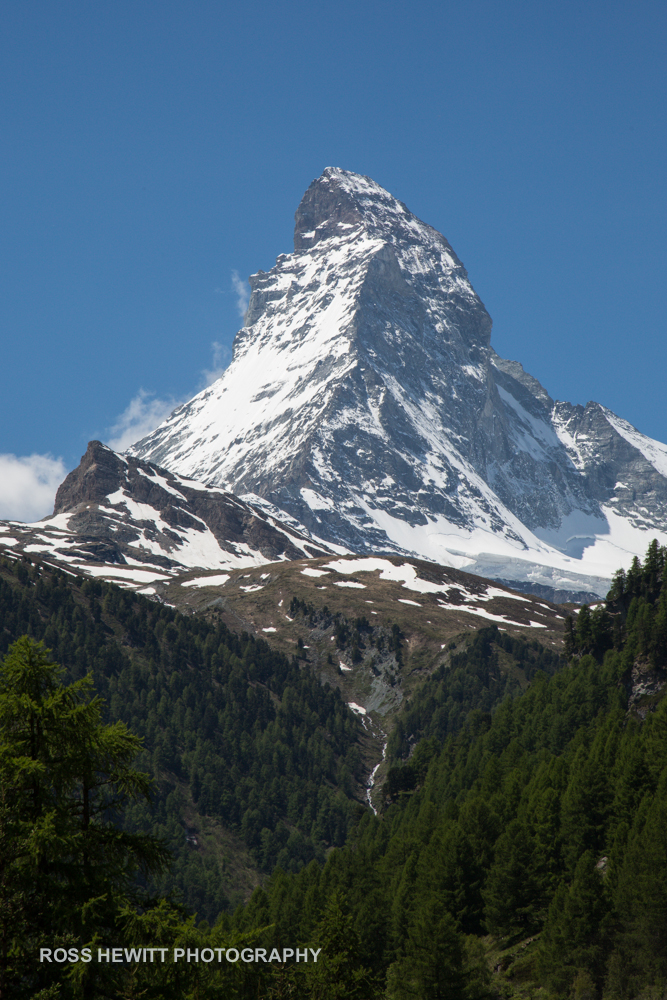 By early June, most of the skiers have swapped to mountain biking or climbing. Mikko is still psyched and we headed in to ski the Matterhorn the hard way. Because the refuge was closed due to renovations, we were carrying a tent, sleeping bag, stove, and a gallon of water each on top of the usual stuff. It was difficult to known what to expect on the face, as so few people had actually skied it. A local guide had told us it wasn’t very steep but looking straight at the face from our campsite a few hundred metres away still made the nerves jingle. 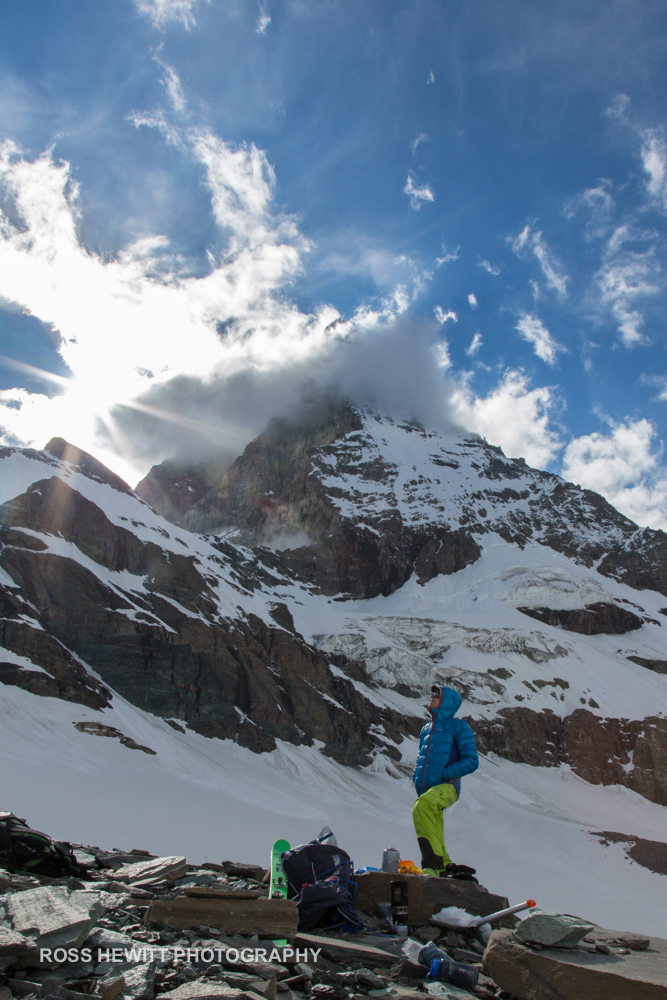 I went to bed early setting the alarm for 2am. Sleeping intermittently I kept thinking that streetlamp was really bright. When I finally poked my head out the tent, there was the Matterhorn, lit up like a stadium under the full moon. Inspired, the whole day was filled with sights of amazing natural beauty. 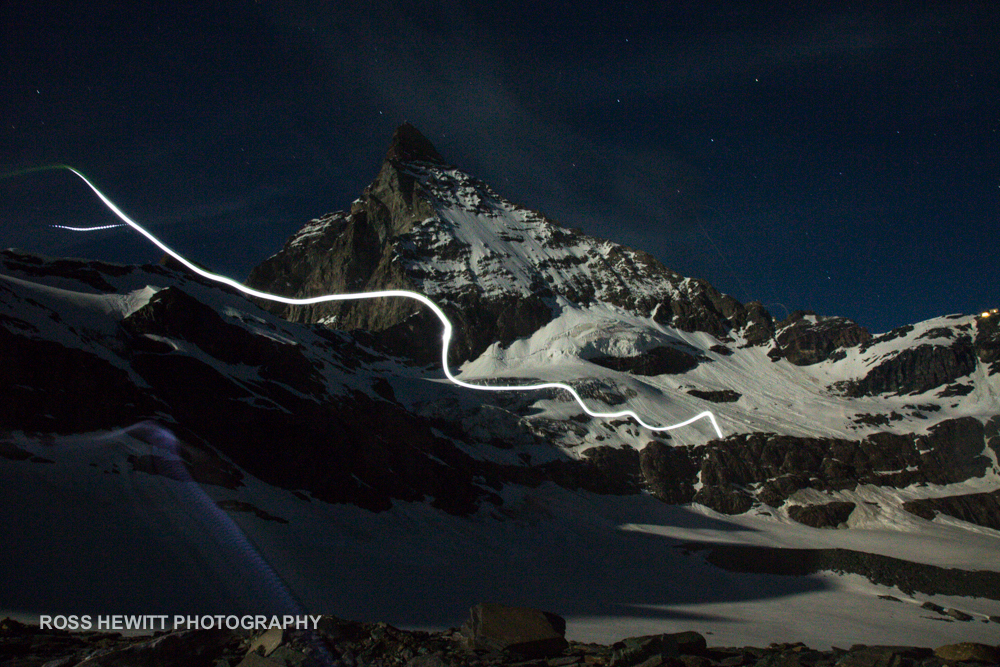 Mikko’s headtorch as he sets off to the stunning Matterhorn floodlight by a full moon. 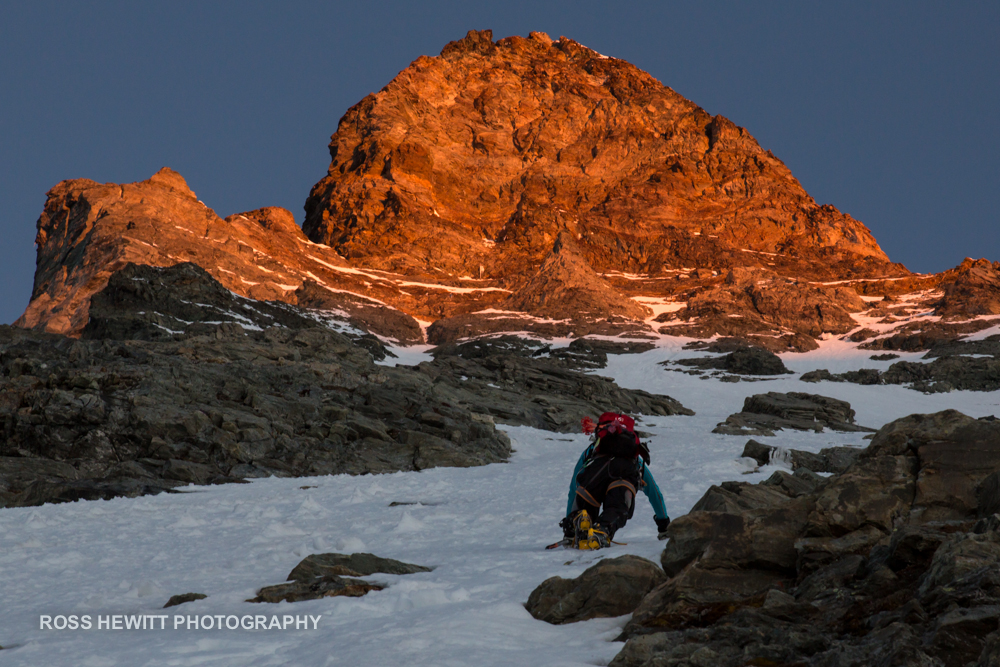 The tip of the Matterhorn was the first thing to be hit by the rising sun and it resembled a blade with blood red streaks on it. This brief morning Alpenglow was soon replaced by a golden light. 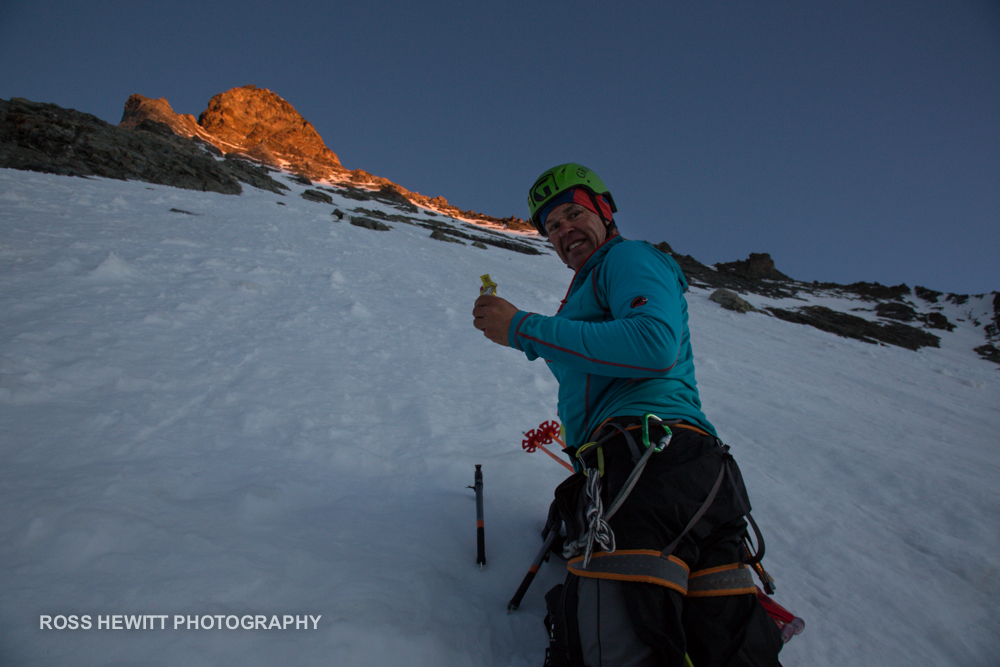 We continued climbing up the face using ice axes and crampons in a slow methodical rhythm aiming for the central couloir that ended at the rocky headwall. I was conscious that the temperature was rising fast which would eventually make the face an unsafe place, speed would be our friend. 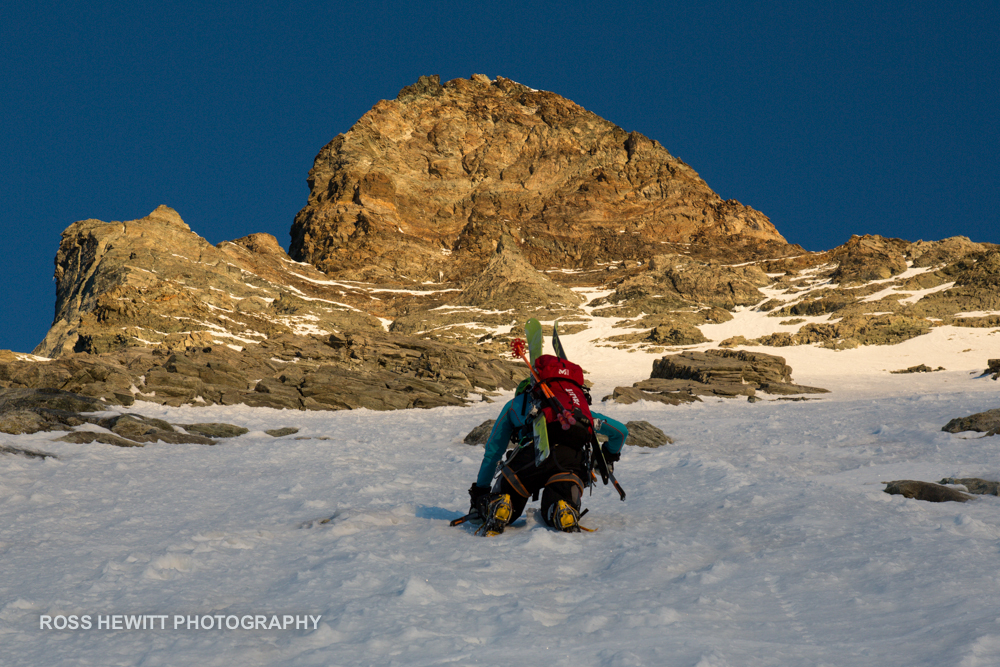 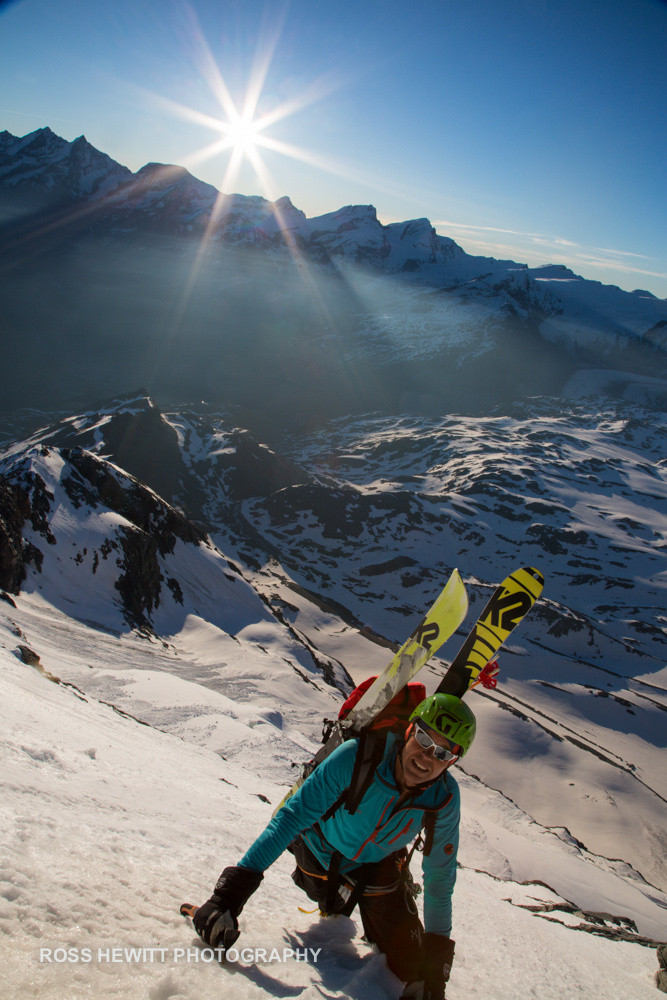 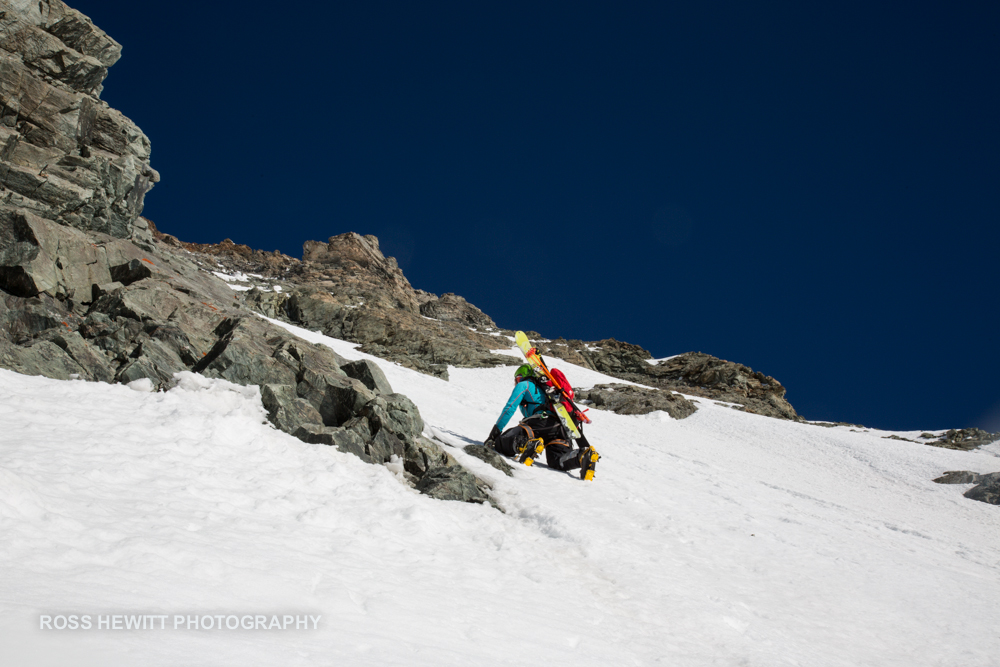 From the top of the skiable terrain the first turn would be on sustained, unforgiving 55º spring snow. Simply standing stationary and holding and edge had every fibre in the body working overtime. I was still clipped to my ice axe for added security while I adjusted my camera settings. Mikko left the sanctuary of his ledge and with axe and pole in one hand committed without hesitation into a series of beautifully-linked chop turns that you’d have been proud of on a lift accessed Midi North Face run with fresh legs. 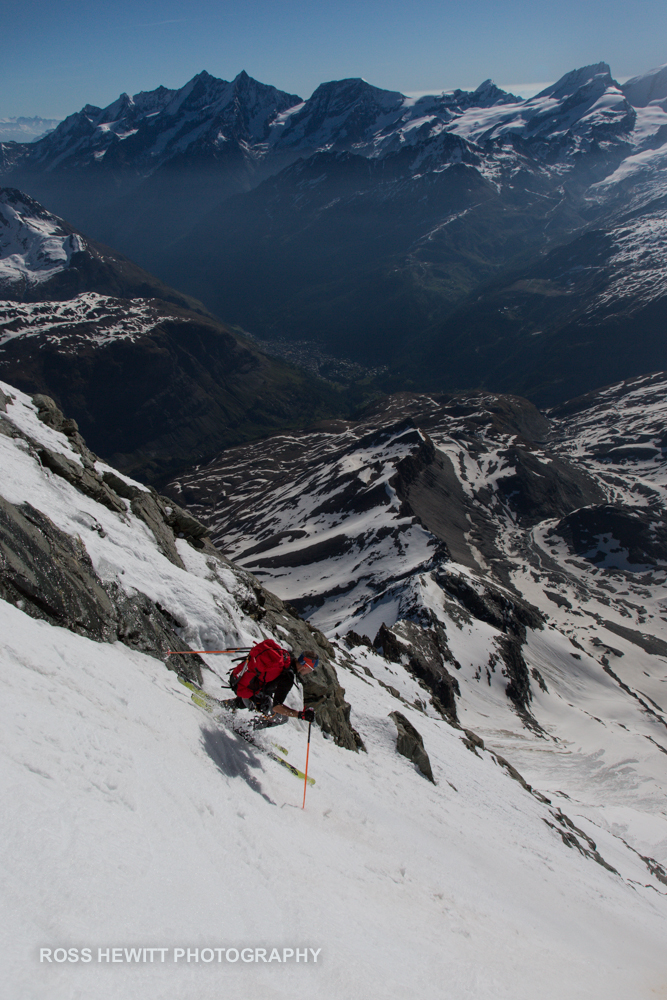 My turn. I was excited but nervous. The face was really exposed looking down uniform rock slab covered in some snow for 1000m. I had been focused on locking my body into a stable platform to shoot from and now I needed to loosen my muscles and refocus on skiing. I was also turning to my weaker side. Skiing second, I had to avoid where Mikko had skimmed the softening snow and find my own edgable spots.

After side slipping a few metres to get the feel of my skis underfoot and edge grip I felt ready for that all-important first turn. Time to commit… no problem, this is going to be fine. As we dropped height and the angle eased to the 50º range the snow softened further and the turns became softer and more rounded. Once we entered the central snowfield the angle was around 45º and we had a lot of fun skiing fluidly and playing with the sluff down to the lower rocks. 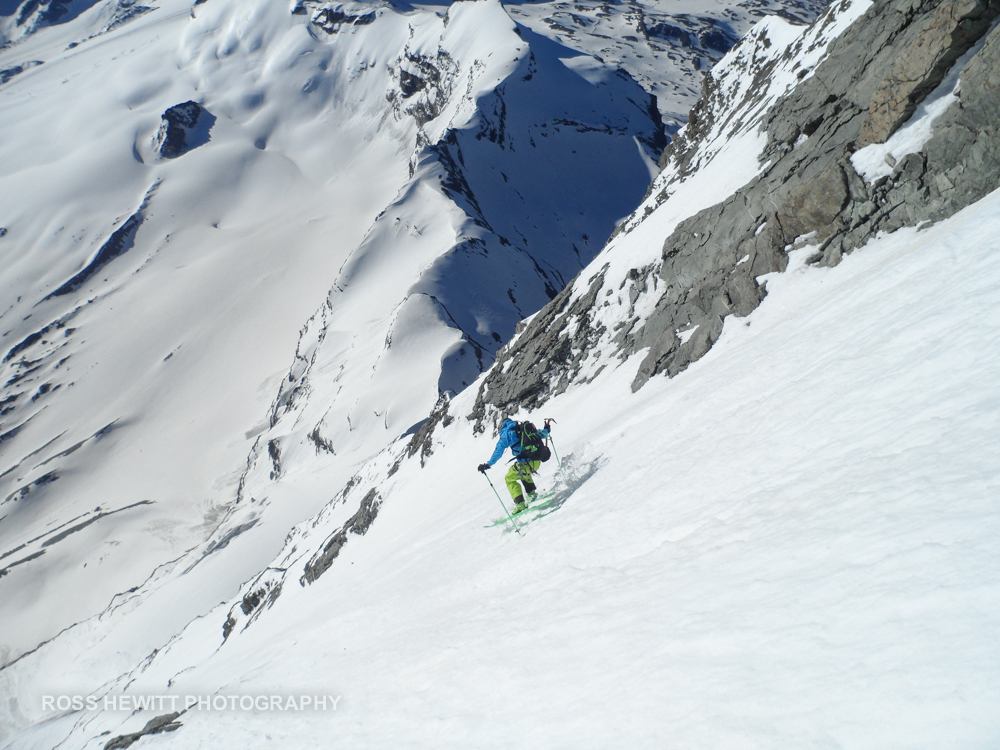 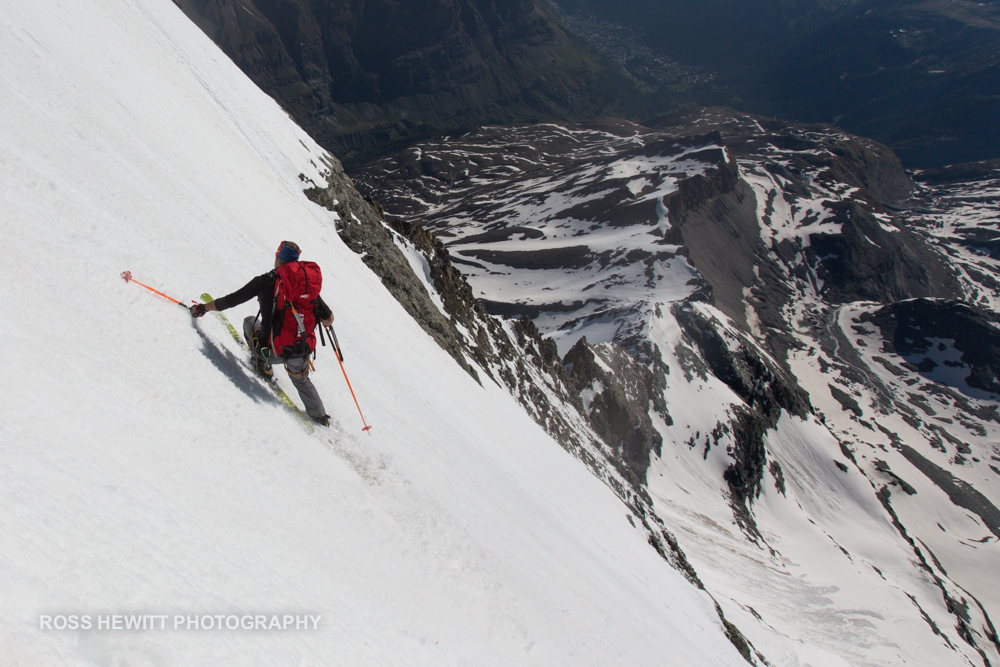 The angle increased here once again and it took some time to find our bootpack to lead us through the lower slabs.

Below the lower crux traverse led through a peppered icy zone to take us to the shrund. All too soon it was over and all that remained was to get well clear of the face which would soon starting shedding thousands of tonnes of snow in the summer heat. We made one short rappel through the lower rock band and then skied back to our camp that we had left 10 hours before.

Somehow we had pulled of the Alpine Trilogy Project in just 10 days, skiing the Triple Crown of alpine steep skiing routes without a heli or external assistance. It hadn’t really sunk in yet, but I had an enormous sense of satisfaction and happiness from the skiing, the wild situations and the performance we had put in. As we packed up our tent, the searing summer temps started to strip the rock slabs of their snow and I knew they would be my last turns of the season and some of the best of my life.

Its been a busy few weeks here which kicked off after a heavy dump of snow plastered all the faces.  A project had been forming in my mind over the last year which involved skiing and shooting 3 of the biggest, baddest and hardest lines in the Alps. The Matterhorn is perhaps the most well known and iconic mountain in the World. Any time you ask a child to sketch a mountain they draw you the outline of the Matterhorn.  Its East Face is an incredible slab of rock, steep enough to defy logic that snow will stick, and its rarely in condition. The West Face of Mont Blanc was a must, Himalayan in scale, the upper pitch alone is 1200 m of 50º starting at 4810 m, combined with another 1000 m of 45º couloir skiing below. This one had been alluding me since 2009 and in years when you have already been skiing for 7 or 8 months, its tough to hold out through June for it. The obvious choice for final route would have been the Eiger West Face but I’d already done it in 2011 and my interest lies in exploring new places. Having not skied in the Brenva Cirque, the Brenva Spur was the obvious choice. A route steeped in history and coveted by Alpinists in a remote and wild setting. After a mild season with low valley snowfall levels, we would be entering and leaving the Brenva by Col de la Fourche and the Aiguille du Midi rather than being able to ski out to the Mont Blanc Tunnel.

All that remained was getting the right partners with the head, experience, strength and fitness to take on these big days. When we embarked on the project I guessed there was 50% chance of completing it in 5 years. The Brenva fell to us first in a 12 hour day and a few days after we nailed the West Face in a 14 hour day – the last 3 hours without water. Reassessing our chances I now put them at 60% chance of completing the project this season but the long term forecast was showing that temperatures would rocket.  A couple of days later we were off to Zermatt for what would be our only shot at it. And we did it!

Skiing the Trilogy or Triple Crown in a period of ten days days was a full on experience, mentally and physically. The shortest day was the last one at 10 hours, all 3 days were at 4000 m or more, and all were a race against the clock before conditions became dangerous in the heat of the day. A bit like doing 3 iron man races in 10 days? Maybe, but who cares, this was a personal quest to ski and shoot in wild places with my friends.

Finding skiers who have enough energy left for some big pushes at this time of the year can be tough but a big thanks to the ever psyched and super strong guys who joined me at various stages along the way to make this project a massive success: Mikko Heimonen, Jesper Petterson, Tom Grant, Enrico Kareletto Mosetti, Guilhem Martin Saint Leon.Below are a few shots from the trips with the good stuff and full blog post still to come.

Sundown from the  Cosmiques Refuge, en route to the West Face with lots of trail breaking to do over Tacul and Maudit.

The Matterhorn East Face under full moon as Mikko Heimonen sets off from camp.

The East Face plastered the day we skied it. 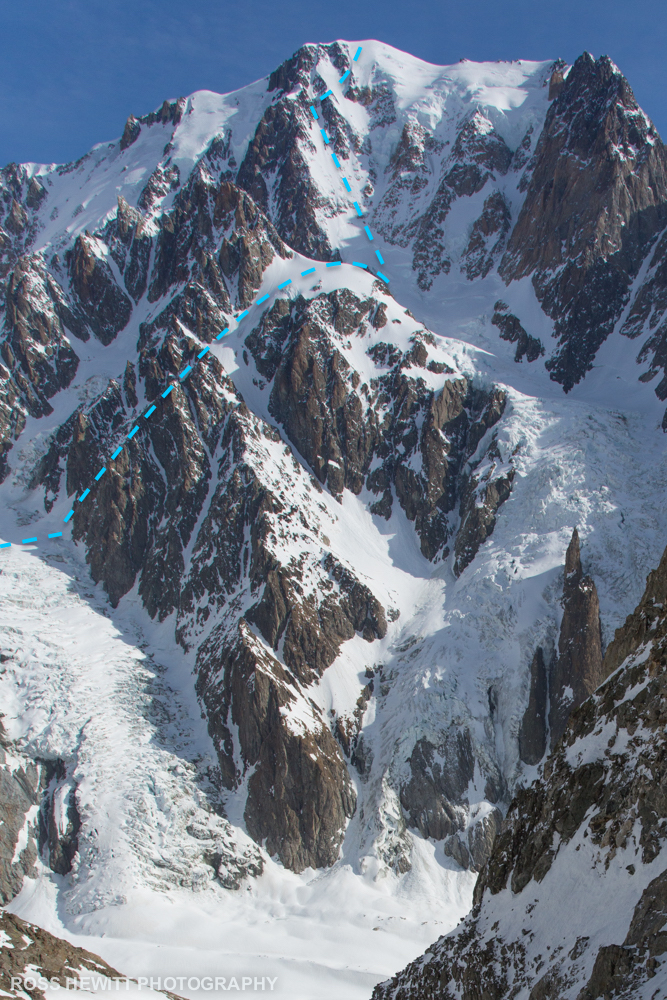 The West Face of Mont Blanc with our line

Heading in the Matterhorn, with low cloud we couldn’t see the line in the upper couloirs 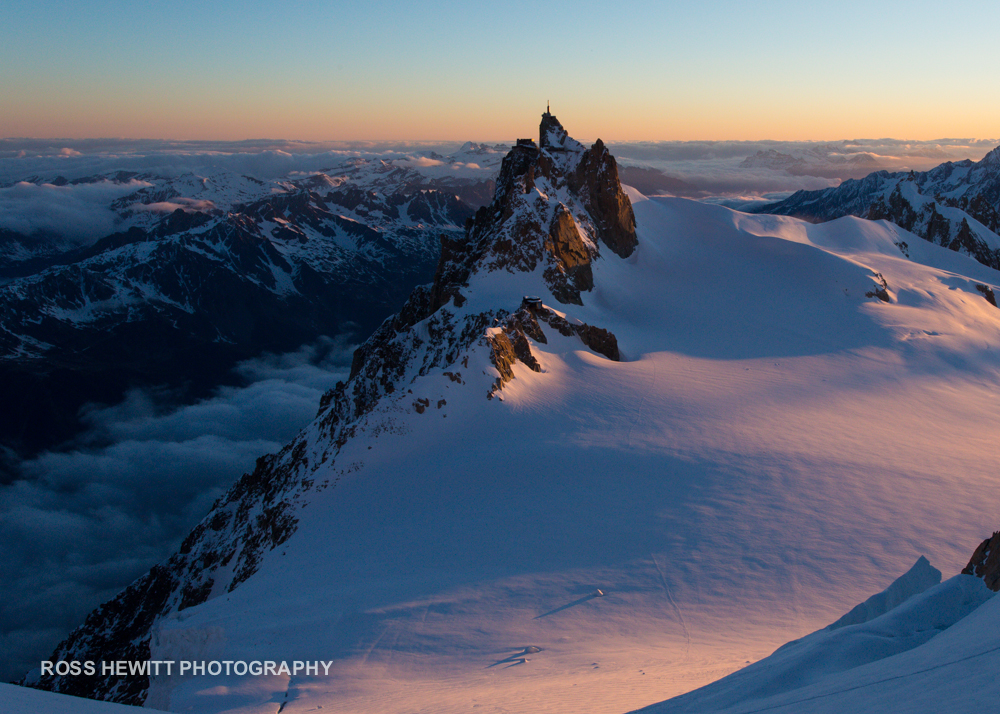 The Midi or Mothership at Dawn, the best ski lift in the World

POV Shot from the Brenva Spur, Italy under a sea of clouds

55º uppers on the Matterhorn above and below

Some POV on the Matterhorn in a steep section looking towards Zermatt. 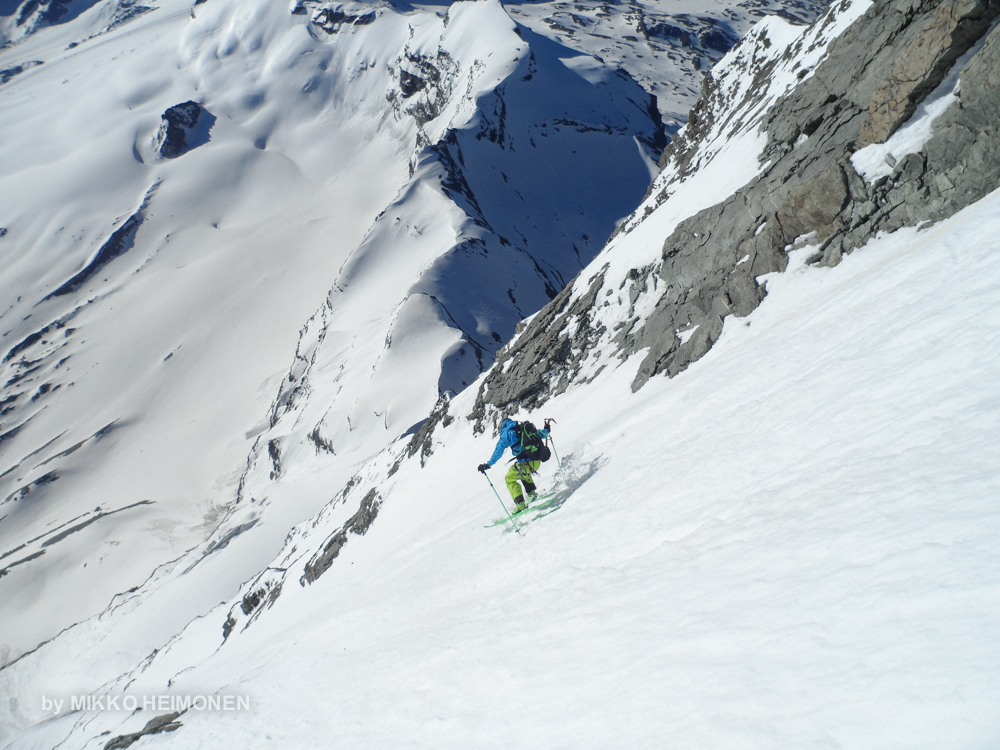 In the upper central couloir of the Matterhorn 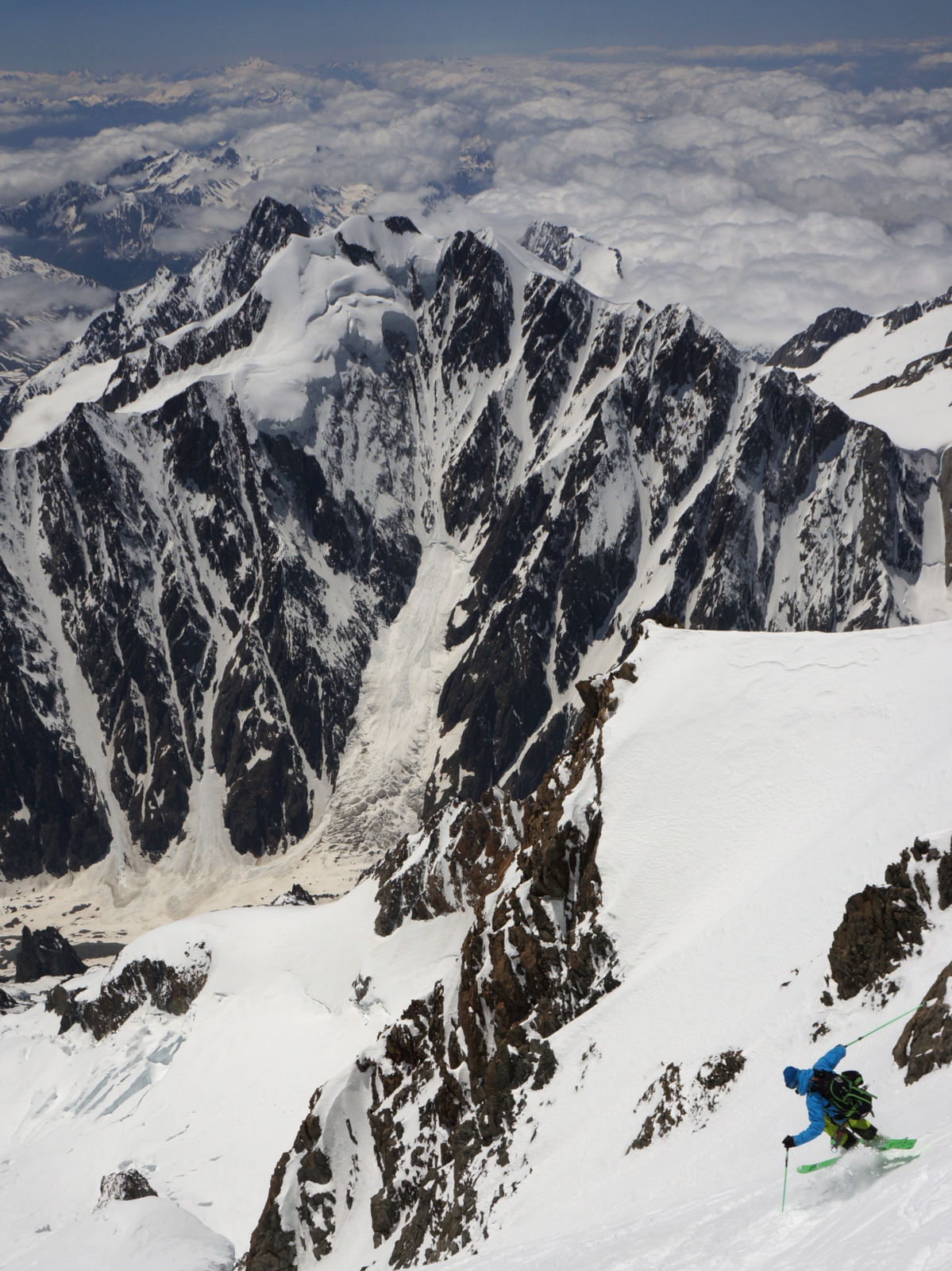